I don't know when Tanfoglio released the Stock III pistol but for as long as I can remember knowing that it existed I have lusted for one. What I do know is that lust has been there for a long time. I could never justify the cost and found the CZ SP01 Shadow to be nearly, though not quite, as attractive at a lower price. Either way I never dropped the coin so which is the better looking pistol never really matter all that much. Options that were even cheaper than both of them got priority when practicality overruled beauty. That all changed about this time last year when I took one look at that tax return and I said, yeah I'm doing it. Like they say in the radio ads for a local car dealership, "Why the hell not? You're worth it!"

First thing was to order some mag extensions for it. Taylor Freelance had what I needed and even though I find the concept and associated price of these kinds of things really annoying, I pretty much need them for competitive shooting. A few companies have done it but I don't understand why it is not more common for firearm manufacturers producing a game oriented pistol to offer the exact same magazines in 141.25mm length. Even if they were a little more expensive, they would almost have to be cheaper than buying a magazine, then buying a base pad that costs as much or more than the magazine itself. If it required a simple plastic sleeve to prevent over insertion then fine. FN recently did this with their 509 Tactical but in their infinite wisdom the magazines are not USPSA 141.25mm legal. Ignore the fact that FN is involved in the shooting sports - apparently their tactical division doesn't speak to their gamer division. The base pads look cool I guess so that's that. Double your mag cost to look cool.

Next, if I'm gonna have a dream pistol then it's gotta be all mine. In that vein I went to Lok Grips for some customization. They do spectacular work, and G10 offers excellent grip, plus I saw some awesome panels they did for another customer which included the cross and Veritas Aequitas text from Boondock Saints, one of my all time favorite movies. Needless to say, I had to have mine like that and the order was placed. The guys at Lok worked with me on color selection and the design. They went WAY above and beyond by sending me a set of test grips because these Tanfos can be a little wonky on fitment depending on the year of production. Of course they fit perfectly when it was all said and done. I got mine with a red accent because I seem to have a thing for gray and red. Even my home made holster carries on the theme.

I love the classic finish that comes on this pistol from the factory. The Stock series guns are made of steel, they're heavy and exude a level of traditional workmanship and elegance that modern plastic guns just cannot. So, all done up in blue, the flats came finished with a brushed shine and all the rounded sides with a satin blasted sheen. Make no mistake, it looked nice. However, my guns do work and nothing destroys a finish quite like the toxic grime excreted from my hands after a long day of multigun in hundred degree heat and equivalent Kansas humidity. It wasn't long and my shiny new Tanfo was developing rust spots. I wasn't sure what I was going to do about it but I knew something needed to happen eventually. 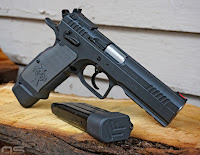 Sadly, the original beauty of this gun will have to be memorialized in photographs. As if it were ordained I won a Cerakote job at a local match late last year and I knew the obvious choice was my Tanfoglio. The real conundrum was, what color? In my mind there aren't a lot of color choices when refinishing a classy looking pistol. Even black wouldn't be good enough. Cerakote is a modern topical finish that doesn't exactly scream elegance for the most part. Rather than bringing out the beauty of steel the way bluing can, Cerakote is a candy shell that covers it up like the shell of an m&m covers up the chocolate. Luckily, there are exceptions and something modern finishes like Cerakote have managed to capture is a semblance of the color shift that gives it just a touch more character than a flat paint historically could. One such color is Sniper Gray. Is has a cool blue tone and such a smooth satin finish that in my mind it reaches sufficient elegance as to do justice to the gun.

The ubiquitous Dawson fiber optic front sight boosts up the sight picture speed to the levels necessary for fast shooting and the result is for me at least, a little bit of a grail gun. It's not wildly expensive but really just captures my personality and stands apart from every other gun on the range. Probably not many people run this gun in USPSA MultiGun and for sure no one who wants every advantage is running this in USPSA Pistol matches in Limited division. It's a 9mm so I'm shooting minor with no magwell in a DIY holster. Here's the thing. I'm never going to own a pistol in any caliber but 9mm unless someone else pays for it and pays me to shoot it. I think most gamer magwells are stupid looking and not really all that functional if you're practicing reloads like you should be. But that's me. I shoot stuff I like. 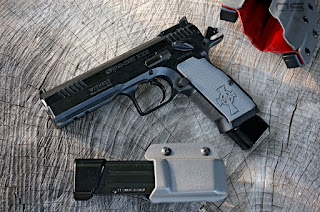 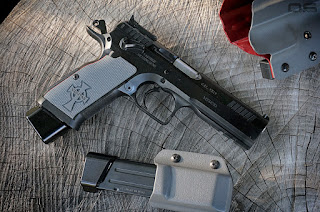