What Do We Have Today?

Digging through the ole flashdrive of pics and projects, how about some CZ P09 action?

Something I just realized about how I'm doing this is that this blog won't be a chronological history of what I've been up to. I'm terrible with life time lines already and using this to recount the past will make that even worse.

But who cares, we're carrying on regardless. I've had the P09 over a year now, put multiple thousands of rounds through it and blasted my way to a handful of match wins at the local multigun matches with it in hand. With more than a full season of action under its belt I have already gone back to iron sighted shooting with another gun in order to give the Czech workhorse a rest and pursue other skills and competitive disciplines. I bought the P09 specifically to have it milled for a red dot and nearly every round fired from it has been guided by the Burris FastFire 3 mounted to it. The only exceptions where a couple initial magazines worth to prove that it functioned and shot well out of the box. Upon return from mill work, I installed the full Cajun Gun Works package and did my own functional, though not perhaps all that visually awe inspiring, stipple work. Slippery guns don't fly in my world. It's not grippy enough until it hurts and calluses are a a useful recoil management tool in my view. Your hobbies aren't a part of you until they change you, until your body changes itself to accommodate your pursuits. 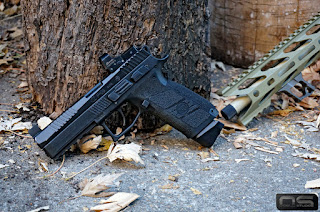 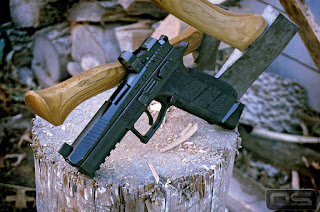 And some home brew kydex, bullets cast from wheel weights and coated with Hi-Tek. 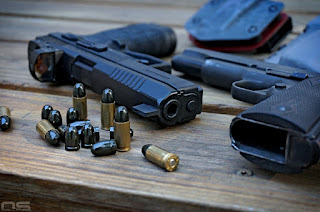 I achieved good success with the cast bullets, however inconsistencies all around are pushing me further and further away from using them. Not to mention the time involved in casting and coating the number of 9mm bullets I sling per year these days.
Email ThisBlogThis!Share to TwitterShare to FacebookShare to Pinterest
Labels: Burris FastFire III, Cajun Gun Works, Carry Optics, cast boolits, CZ P09, Hi-Tek coating, multigun, Primary Machine, Slide Milling