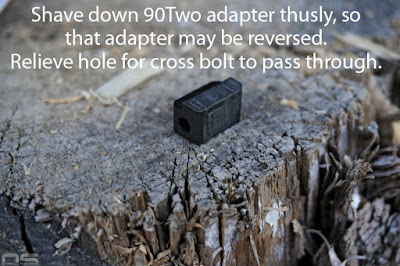 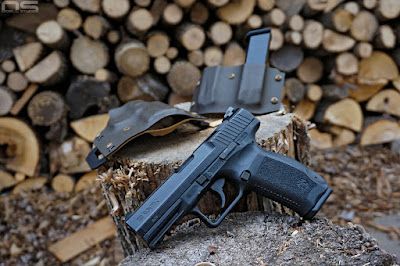 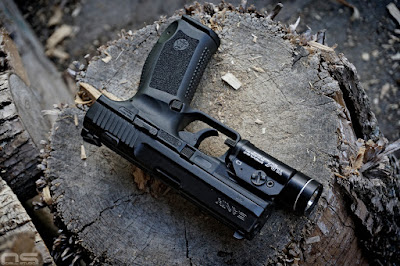 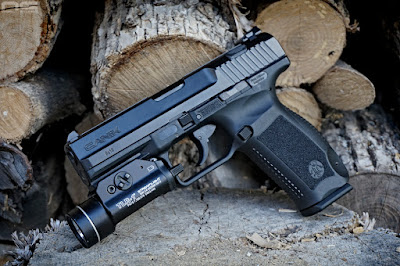 Doesn’t look like much in the pics but if you’ll direct your attention to the size of the trigger guard on the TP9 V2. It was designed so that you can shoot it with mittens on - you simply shove your entire arm into the trigger guard and flap like a penguin to fire. Well, I was not able to reach the switch on the TLR-1 with my trigger finger. Not a big issue, because my support hand thumb could get to it fine. But hey, that support hand could be busy doing something else at the moment light might be needed. Just never know.
So I took the 90Two adapter that comes with the TLR-1 so that I wouldn’t have to jack up the 1913 adapter, and made some mods (and really, who wants a Beretta anyway). The goal was to reverse its orientation inside the light body in order to set the light back slightly, but the adapters have a lug which allows them to be seated in only one orientation. Next, the 90Two adapter fits 1913 perfectly, but it is too tall. That is to say, apparently the slots in the Beretta rail are deeper than 1913. So, shave down the orientation lug and the rail slot lug (you can see the scratches in the pic where sanding occurred). Next, the cross bolt which retains the adapter will now be passing through the adapter from the other side. It already has a hole, it just needs to be enlarged enough to allow the bolt to pass through. Having a belt sander and drill press, this mod took less than 5 minutes.
I dunno, maybe you have a Canik TP9 V2 and you have a Streamlight TLR-1 and you put them together and said to yourself … this kinda blows, if I’m honest. Problem solved.
Email ThisBlogThis!Share to TwitterShare to FacebookShare to Pinterest
Labels: canik 55, canik tp9 v2, century arms, feminism is cancer, firearms, guns, kydex, NRA, pew pew, pistol, streamlight mod, streamlight tlr-1, tactical, wage gap, weaponlight