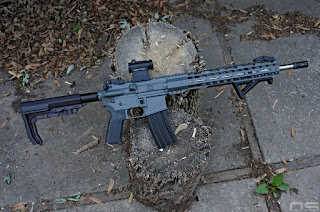 I get it, back up sights, gotta have 'em. Or at least, that's what they say, but I think the sentiment really applies to serious defensive or fighting rifles primarily. So if what you're reading is; Chinese sights and a reviewer who doesn't wholeheartedly believe BUIS are absolutely necessary then you're probably already out the door. That's ok. The deal is, thousands of rifles are sold each year to people who don't train, have no intention of training, have no aspiration or delusions concerning their operator status, and just all around don't take the whole AR15 ownership as an obligation to conform to the pew-pew lifestyle. Far and away more cheap equipment is sold for them than expensive battle tested brands and it's likely these owners are perfectly content, and never find a reason to talk about their purchases. They aren't on forums, or youtube, and they aren't blogging.

Fact is, it's true that I'm not entirely convinced BUIS are compulsory equipment. Obvious examples are found in the competitive world. Sure lots of folks run them, and no doubt plenty of gamers consider them must-have, but if an electronic optic goes down and the shooter has a bad day, there will always be tomorrow.

The modern sporting rifle market is also full of "analog" sighting equipment that does not rely on electronic gizmos. I realize the argument is frequently that a bullet, or fall could potentially take your optic or electronic sighting system out of the fight. I agree entirely, however, I think the same could be said for any sighting system. One bonus benefit of folding irons is that they are compact and tucked in close to the rifle for just that much more protection. It's all true. I can't argue.

Many have said - and I find it to be another truth - they are able to use an optic as a large aiming aperture should the electronics fail. Center up the target in the tube, press trigger, proceed to combat accuracy. At living room distances, point shooting takes little to no practice to master and no sighting equipment is required at all.

Finally, just like with my other rifle, I'll probably never even use the BUIS and since "back-up" consumes fifty percent of this equation, it really boils down to odds. Back-up implies that they are secondary or just in case. When the wallet opens up, the mental gymnastics are as follows. How hard am I going to run this gun? The harder you are on your stuff, the likelier it is to get damaged. The more likely it is to get damaged, the likelier you are to need back-ups. Next, how vital to survival is my blaster? If an airplane part fails causing the plane to crash, everyone dies - ok back-ups are making sense real quick. I'm not saying it's right, I'm just saying it happens to us all when we start considering our budgets. Sights are expensive, bordering on overpriced in my opinion. They are simple machines, made of inexpensive materials. The brand laser etched on the side must be worth an awful lot to justify the prices we're seeing today.

And so, these ramblings bring me at long last to the point where you're free to draw your own conclusions. After laying out my own thoughts in neat little piles, I can only say that I fall somewhere in the middle apparently. In the end, here I am with BUIS on my gun.

Initial impressions go something like this. I saw that UTG put out these MNT 755 and 955 Low Profile Flip-Up Sights and they actually appeared to have departed from the typical hokey Chinese things we've seen in the past. Often times even the product shots can't mask the poor quality. UTG has also made an effort to bring work to America and produce quality products. While these sights are not US made, I think they do represent that effort toward a better product. They come in priced higher than typical Chinese sights, but still less than essentially everything else, including the budget king Magpul.

First ding is the nylon/plastic/polymer detent ball used to keep the sight up or down. However, the sight uses a locking pin which prevents the sight from folding down while in the up position. How tough it is remains to be seen. This pin must then be pressed in order to fold the sight down again.

Fit and finish is excellent. Are we getting the toughest anodizing on the planet? Probably not. Nonissue. I'll lump design into fit and finish because the design appears mostly original and less derived or straight up copied than other Chinese sights. Small details help give them an overall attractive and legitimate appearance. You'll also note that they are low to the rail and in fact, the rear sight sits on the rail when stowed. They are compact in width as well, without any extra buttons or levers or screws jutting in all directions. The rear windage adjustment knob is compact and neatly marked with an R and arrow.

Speaking of the windage knob, all the moving parts are positive and don't immediately scream cheap or poorly made. The knob has big, tight detents that don't feel like something you might accidentally move. Again, this is first impressions, but the elevation was correct out of the box and a slight windage adjustment got me dead on with my red dot which is at absolute co-witness height (though I'm not sure making a windage adjustment based on the red dot is worthwhile). The rear aperture has a metal detent ball and the tactile different between it and the main ball is noticeable. I have my doubts about the nylon ball.

The cross bar for the rail is a threaded screw, not a square bar, but there was little to no fore and aft movement and lockup was perfect. For an optic mount where you are dealing with a pound or a pound plus moving around under recoil, the square bars make a lot of sense. For an ounce and a half, not so much.

There is no spring flip-up feature which I am personally glad for. I think the focus may have been on simplicity which left more room for quality than gimmicks. There is a locking feature in the up position, as I mentioned before, which eliminates much of the perceived worry from the nylon main hinge detent balls.

So, the primary positive initial impressions are that the sights are cleanly made, were nearly correctly aligned out of the box, and are overall very compact in size. I think this product is worth an initial impression evaluation because I don't find any reviews out there for them right now, and poorly made sights in the cheap Chinese category are typically pretty easy to spot after giving them a once over. Eventually I will follow up after some real use. Pics! 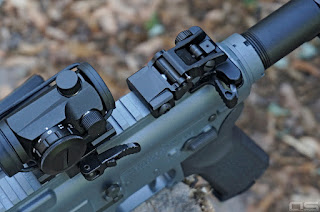