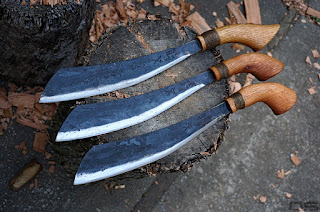 I have discovered about myself a system of doing things, particularly where my hobbies and crafts are concerned, where I have to have a thing in my hands and let time go by as I figure out how exactly I want to proceed. That sounds perfectly reasonable, except that the idea for the project has to be pretty well planned out before I can begin to collect the parts and pieces required to accomplish it. It's like knowing exactly what you want to do, and even the steps needed to get there, but it all has to simmer in the brain a little longer before you can begin. And when I say a little longer, I mean six months, a year, maybe more, and any sooner would be forcing it to happen which can lead to less than satisfactory results. Preparing for interesting projects is practically a daily activity - learning, researching, gathering components - but inspiration for a single project can be more sporadic and is almost always worth waiting for. My Parang blanks from Bidor Malaysia are a good example of this. I think I ordered them close to a year ago and I didn't waste any time getting one of them put in a handle. It came out great and the handle feels very good in hand. And it was necessary, because without a finished product to study and test I wouldn't have been able to let the concept improve with time. I think that our perceptions, ideas, and inspiration are both growing and evolving, in that we build onto them without necessarily changing them, while others are abandoned altogether or transform into something different. Is deep philosophical reflection really merited when discussing what are largely regarded as little more than run of the mill tools to the people who use them? I guess that's a matter of perception in itself, though it might be helpful for others suffering from the same sort of process to know that you aren't alone. Point is, it took me a long time to get around to working on them and that's my official excuse.

Now, in my own defense, I had some time to use the first one which goes a long ways toward knowing what to do with the next. I knew right from the beginning that I wanted all three of them to be different, but exactly how to make three very similar things "different" wasn't immediately obvious. As for drawing inspiration from what is already out there in the world of Parangs, I had seen some with very nontraditional handles on them and that interested me. On the other hand, I wanted one to look pretty typical of your average Malaysian Parang and the third to be my own brain child. And one day recently I was ready to proceed.

I decided that the reasons not to pin the handles just didn't outweigh the perceived value and simplicity of pinning them. I felt that the handle needed a little more personality, that the pin needed to be very simple and hidden, and that the narrowest portion of the handle needed some support. With these requirements in mind, I choose to use a wrap rather than a metallic collar of some kind. I could have easily used a section of brass pipe and maintained the authentic jungle crafted appearance, and also achieved excellent support for the wood around the tang, but I like the appearance of the jute twine. It has a more naturally sourced appearance and I used epoxy underneath with the hopes of a strong and durable collar. I used a nail for the pin, epoxied and peened it into place the way I have seen it done in videos from Malaysia. Again, having the pin under the wrap added support around it and sealed it in it for the duration. My intent was to do all three blades this way but as I got myself into the groove of carving the track and wrapping the jute, I looked down, all finished with the wrap on the first one, having completely forgotten to pin it. Oh well, I had been using it without a pin so far with good success so we'll just see how long it lasts

One last step, and this one wasn't much different from the process for the Parangs themselves, make sheaths. I knew what needed to be done, I just wasn't sure how. It's carrying these large knives that I see as the issue. Yeah, I could lash it to my leg and use some kind of articulated dangler and that would probably work, but I have never liked having things banging around my legs, or strapped to them. In fact, I find cargo pockets annoying because if you put anything in them, it's banging around your knees. I don't like anything that restricts movement really and I've always tended to carry the absolute minimum gear while in the woods and especially while working or wading through thick brush. 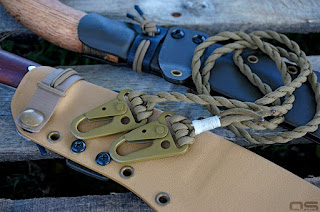 Enter the Baldric style of carry. I know nothing about the history of the term, or that it was a term at all until I read it somewhere. It just seemed like the most sensible way to go and low and behold, like most things, there is a term for it. Near as I can tell, Baldric carry is just to sling the thing across your body - easy to put on and take off, move out of the way, and less likely to get snagged. I have a sling already made with H&K hooks and double cobra knot paracord which is very comfortable to wear and works great on these sheaths, but what you see in the pics is a simple paracord twist with the H&K hooks. There are about a million different ways you could accomplish the same thing. I just happened to have the hooks in my box-o-stuff and they are uber secure. I am also working on the BCUSA Bushclass, so I needed to practice the two strand twist and whipping. Just made sense to make myself something useful. The downside is that it will probably get uncomfortable with much weight on it and so it will probably get modified over time. I also employed the pull-the-dot soft loops typically used for IWB handgun holsters, which are again, strong and secure and easy to adjust to the lengths needed on my sheaths. 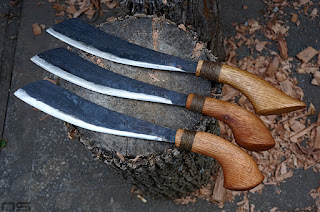 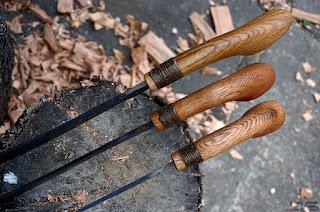 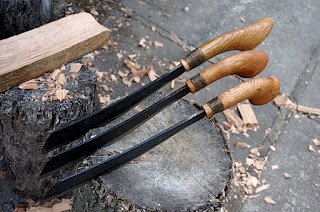 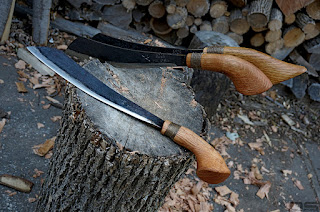 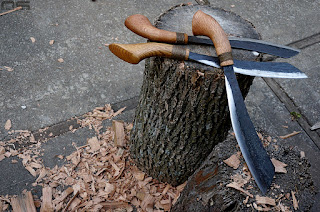 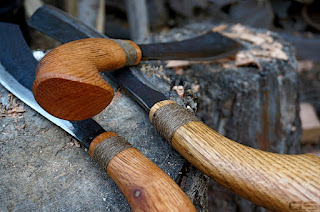 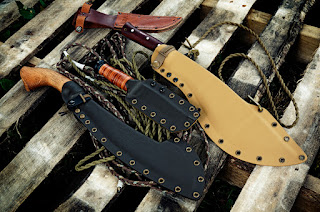 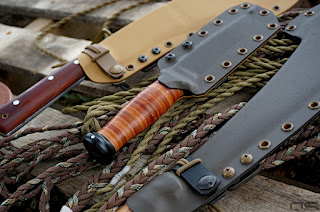 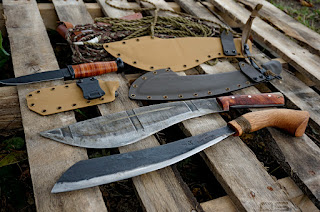 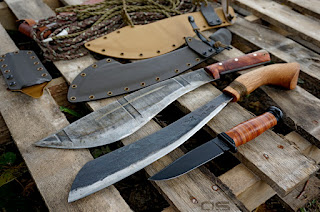