Pulling a few screws from your typical modern locking folder isn't exactly an intimidating proposal if you're thinking about modding one. In fact, it's nice to be able to get them apart to clean them up from time to time without it involving major undertaking. But slipjoints, those are a whole different ball game. For the most part, when they're traditionally assembled, you don't just pop one apart real quick for maintenance and pop it back together when you're done. Modding a traditional slipjoint is a project. I've had a mind to give it a try for a long time, but just didn't quite feel confident about the whole process. With these Marbles, Colt and Rough Rider knives coming in at about $10 shipped, I began running out of excuses not to get one broken down and learn a thing or two. And in the end, it really wasn't very difficult at all. I ran into a few hiccups along the way, and that's to be expected. There are a number of limitations to what you can do with these knives and I actually found that the most annoying. There is little to no standardization in the patterns, even among similar designs and sizes. The size of the tangs, the distances between holes in the back spring and the mating surfaces of the springs to the tangs all vary widely. Someone more knowledgeable could probably make minor tweaks to these areas to mix and match, but basically speaking, there won't be a lot of handle and blade swapping between patterns. I found with these knives that there are what are called locating holes in the liners where the bolsters can either be soldered on or even cast to have little pins which can help keep them in place. In some cases these were utilized, in other cases they weren't. Often these holes are very close to the edges of the liners, limiting just how much reshaping and refinishing you can get away with, and part of completing a slipjoint is a fair amount of both. If you're interested in changing the cover material, well you're in luck because that will work out nicely. You could even put in your own shield. It will take some fitting and you might have to make your own cover pins (or leave them out), but there aren't many obstacles holding you back.

Pins seemed to be my biggest issue. Being Chinese produced, they also use metric pins and I have never been too sure what the pins are truly made of. I assumed that I wanted stainless and it turns out that getting metric size stainless pins is almost impossible in the US. In the end I actually ordered them from China. But since then I have learned that the pins probably aren't stainless, in fact there are some old companies known to have used stainless and they could be identified because the pins didn't match the bolsters. Mine don't match the bolsters and after some pocket time, they match even less. I later discovered that metric nickle silver slipjoint pins ARE available through many of the online knife supply places so if you decide to tackle this project, don't be like me. Just get yourself some nickle pins. They will peen better and match your bolsters. Now, do I care about the matching? No. It could be said that my knife is now stronger because it has harder pins in it and if that's something you would like, then by all means, there is no compelling reason not to use stainless. What I know in the end is, beauty aside, this knife functions better now than it did fresh out of the box.

A couple final notes. There are a few good videos on youtube so watch them. The pins on these particular knives are all the same size (except the cover pins of course) which is nice. You'll only have to buy one size pin stock unless you plan to remove or replace the covers. I didn't use anything to prevent the knife from getting too tight as I set the pins, I just went slow and probably got lucky, but it came out perfect. I disassembled the knife with a utility knife blade. I put the utility blade between the tang and liner on the knife, set the two down onto a slightly open vise, and drove the knife down gently into the utility blade, effectively cutting the knife apart. It's actually very easy and effective. Get yourself a properly sized punch to get the remains of the pins out once it is all in pieces. And glue, I used super glue and I probably wouldn't do it again. I know epoxy takes forever, even the quick stuff, but super glue just is not forgiving at all. I glued the bolsters in place and with your fingers in there and trying to clamp stuff, well let me just say it's really not worth being in a rush about it. Epoxy will allow you to get things just the way they should be, clamp them, allow a little extra to flow out and fill cracks, and best of all, not attach your fingers to anything. 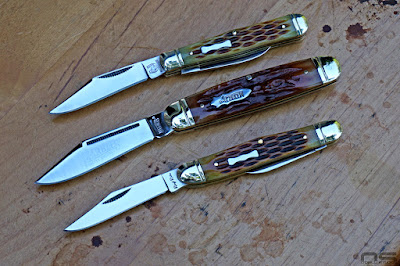