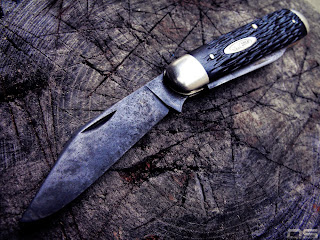 In my Grandfather's basement we found a poem from his service in World War II, and to borrow from it, he's served his last hitch in hell. I felt it was a fitting poem to find so shortly after his death, written in his own hand, saved for over half a century, pristine, neatly folded and perhaps read by no one but his wife until then. As his children have begun the process of sorting through my Grandparents' belongings, a number of pocket knives have been found. My Grandfather suffered the Great Depression - coupled with living in Kansas during the Dust Bowl - and did the same sort of work his entire life, believing I think, that job security and frugal spending where of the utmost importance to being the sort of provider that his father may not have been at times. Each of the pocket knives we uncovered in his home were used, loved as an enthusiast might say, sharpened away in some cases to nothing more than pointed steel toothpicks. The bone covers on one old Case Stockman where worn so thin that the jigging was missing in some places, the ridges and valleys reduced to small bumps in others. The worst of them had been relegated to workbench duty to be used when the task required only the least valuable tool. Amongst them though, this knife, a Robeson Shur-Edge Jack Knife. At first I dismissed it, and maybe he had also. The black plastic covers don't especially convey quality, and in truth neither do the fit or finish of it. I can't help but wonder, why he had discarded just this one knife, even if it wasn't of great quality, when he used up virtually all the others, even those of lesser quality. The answer may be mundane but the imagination seeks fantasy. Upon closer inspection I began to realize, not only does it appear unused, it may even have the factory edge on it. Once I unearthed the tang stamp I discovered the rich history of the Robeson Cutlery company and its influence on American cutlery. My research suggests that the knife was made between 1940 and 1964. My grandfather would have been a young man in the 40's, a soldier during many of those years, and never a knife collector. I can't imagine a scenario in which he would have been given this knife decades after production, and certainly not one where he purchased it himself and never used it. Why would he be gifted an old knife? Why toss aside a gift? Why would he never use a knife if he'd received it new some way other than purchasing it himself? Wonders never cease I guess. Its proximity to other beater tools and the aggressive glob of rust that had taken hold of the pen blade suggests to me, regardless of how he came by it, that this SHUREDGE was unwanted and unloved. 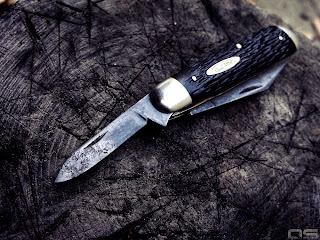 I can't say who will dig through my belongings when I am gone, but it will be obvious that I was something of a knife enthusiast. I doubt many of my knives will be used up, or for that matter, particularly valuable. With an ever growing collection, it's easy for me to rotate knives, thereby significantly prolonging the life of each of them, leaving them for someone else to enjoy. This homely jack knife, with a deep scar earned from years of neglect is now embarking on a new leg of an already long journey. I like the idea that it is somehow a survivor of difficult circumstances where others weren't so lucky, not unlike my Grandpa. It is a fitting reminder of him, a fitting token for a knife enthusiast Grandson, that will be loved for many years to come.

When final taps is sounded and I am through with all life cares,
I'll walk my last parade upon those shining golden stairs.
An Angel there will welcome me, and harps will start to play;
I'll draw a million PX checks, and spend them all one day.
The great commanding officer will smile on me and tell;
Come take a front seat Soldier,
For you have served your last hitch in hell.