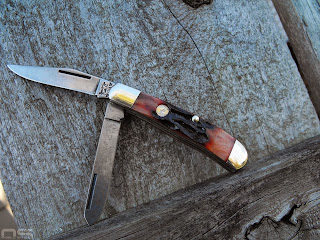 To use one of my all time favorite movie quotes, I have morons on my team. When I say team, I mean the human race. My Grandfather called it diarrhea of the mouth - you can recognize it as those moments in life when you're trapped, interacting with another member of the human race, wishing above all wishes that you could be somewhere else, while they vomit incoherent drivel all over you. These individuals not only form senseless, baseless, uninformed opinions, they also feel the need to share them, openly and as if chiseled in stone. Their steadfast, but ignorant sense of what is right, correct, and proper, causes your ears to bleed, your blood pressure to rise, sets your mind to thoughts of violence. George Carlin accurately labeled these sorts of people; stupid, full of shit, or nuts. I'm talking about the stupid ones. They are the people who need everyone around them to be aware of their vast knowledge, even though they actually know very little about even less. You can't argue with them, because they can't even grasp the topic of conversation, let alone structure original thoughts. All you can do is write a blog post in hopes that others suffering the moron's blight will empathize with your malady. 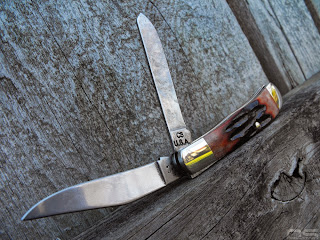 And today we have ourselves a Bear & Son Trapper of the 3" variety from their 4th Generation line. Cue laughter. Maybe I should have some hateful commentary at the beginning of every review. Maybe. Anyway, Bear & Son is putting out US made knives using 1095 carbon steel and those two basic features alone make them worth a look. This little guy came in at $38 so it's not a wallet buster, and is very close to a similarly sized and featured Trapper pattern from Case, a well known US slip-joint brand. Unfortunately, that's where the trouble starts. The market for traditional styled knives is probably fairly healthy in America, not at the levels it once was, but there is certainly a nostalgic aspect to them that keeps them alive. With that said, and considering the ever expanding selection of, and demand for, modern folding knives, slip-joint manufacturers operate in troubled waters where the competitors are doing good work. This is troublesome for Bear & Son because the Case Trapper is a direct, equivalent alternative to their own. It offers similar features in the same pattern, for the same money. That means they both need to offer, at the very least, equal quality, and in a competitive world, their customer is looking for more perceived value in one or the other to break the tie. Case already has one advantage, their branding. They've been at the game a long time, they're known, and for the most part they deliver on consistency. 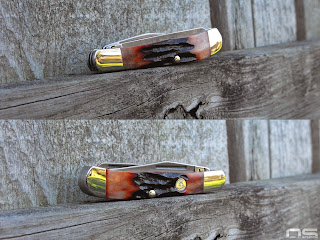 All that I could determine from my own research was the Bear & Son knives suffered from some fit and finish issues. No big deal, I thought to myself, I like tweaking my knives anyway. At the time however, I hadn't realized that Case had an offering so close in price. When my B&S arrived there were some minor fit and finish issues. And, as I expected, I was able to remedy the worst of them to produce a knife I was really pretty happy with. There are a number of aspects that I think are a success in the design of my Trapper and overall I was pretty pleased. With the notion in mind that the 1095 steel would be the least of my worries, I saved sharpening for last. I can't claim to be a knife sharpening master, or a steel guru, but there is something off about the blades. I cannot get the sort of edge that I expect from it. I have sharpened a number of vintage pocket knives for myself and for others that presumably use 1095 or something similar, with good results. It's not so much an issue of sharpening skill as it is expectations. What I mean is, all carbon steel pocket knives I've sharpened have felt similar and performed similarly, so going into the B&S I thought I knew what to expect. I just knew, 1095 blades would be thin pocket razors and a few blemishes would be insignificant by comparison. The experience however, was nothing like my expectations. At the moment when an edge is expected to form, it seemed to crumble and it ground unusually hard. I tried coarse and fine stones, heavy and light pressure, nothing seemed to agree with it and I never got a distinct burr to form at the edge. What does this mean? Did I get one from a batch of lemons? Does this mean there is a heat treat issue? I just can't say. I want for these to be good knives that I can recommend because they are affordable US produced knives. I just can't, given my experience with this one.

I am one of those people who reads or watches a review where the knife couldn't be sharpened and I think to myself, yeah right. I can sharpen anything. The truth is, it's frustrating and I'm open to suggestions. I felt that something was happening at the edge each time I got close to having it sharp. I will most certainly give it a second chance and let the sharpening be a sort of evolution over time, but I think it's fair to expect this steel to be as easy and enjoyable as sharpening any old carbon steel pocket knife has always been. The bottom line is that this example from Bear & Son has stiff competition and it will have to improve in order to overcome it.

UPDATE: I did in fact give my little Trapper a second chance, and then a third. I'd like to think it's not unreasonable to say that the steel is in fact hard to sharpen because they didn't even get it done at the factory. For my third sharpening session I decided to use a fine stone to get it as sharp as I was able - the point where the edge seemed to simply refuse to go any further - then skip to a hard Arkansas to finish it up. The steel didn't agree with anything coarser and only with a back and forth polishing motion did I finally produce a wire edge. Once I had accomplished that it was a simple matter of pushing it side to side to refine it. It is now sharp, and maybe I learned a valuable sharpening lesson, but it was a fair amount of effort to get it done.
Email ThisBlogThis!Share to TwitterShare to FacebookShare to Pinterest
Labels: bear and son trapper review, budget slip joint, everyday carry, jigged bone, pocket knife, slip-joint, slippy, small trapper