Professional shooters probably rebuild or replace guns pretty regularly like race car drivers rebuild engines, whereas typical gun owners may pass a gun down generation to generation and few typical car owners replace many engines even if they keep a car for a lifetime. So when it comes to airguns there is a cost savings that allows pretty much any owner to cycle the machine far more than that same owner might a firearm - closer to the way a professional shooter would. For me it was no problem to crank through a thousand BBs or more in the short time I've owned the Blackwater 1911 yet, even shooting some IDPA, it took me a couple years to shoot 2,500 rounds of 9mm. This point makes me wonder how fair it is to criticize the longevity of these products and also consider what a reasonable life span might actually be for them. At the end of the day we know that the quality and attention to detail is more than likely sub-par, or at least, I tend to lean toward this conclusion. What's more, the materials aren't high quality and to be honest, don't necessarily have to be either. For me, it really comes down to design. An airgun generates very little energy and the moving parts don't undergo particularly violent stresses, so cheaper materials really are sufficient. That doesn't mean that poorly designed parts won't fail.

The first air pistol I purchased was the very poorly designed G&G airsoft 1911. The materials it is constructed from should make an excellent air gun. However, certain internal components are so poorly held together that I believe every one of them will fail. I returned mine when it fell apart and have hardly shot the replacement. I returned to the airgun market recently to try the KWC 1911 in 4.5mm to see if anything had changed or improved. It would appear that things have improved and if you'd like to read more please visit my other posts on the subject.
New Airgun Addition SIG X-Five
KWC Blackwater Part 2
KWC Blackwater Part 1

I've had the guns apart and inspected them, looking for the flaws. The flaws with the G&G were well hidden but at one point I had the gun completely (beyond field stripped) taken apart and they certainly became apparent then. These KWC guns are simpler. The only parts that can't be readily inspected are the trigger group and the associated small parts housed in the frame. The bottom line is that these air guns do not need to cost any more money to be better made, they simply need to be designed correctly. So the questions are; are the designers bad, or do they create weak points to sell more product? Either is possible of course. A little more digging around the net and I began to find people less pleased with the variants of the KWC 1911. They mostly complained about jams, but I wonder if those aren't caused by another problem the users overlooked. My 1911 hasn't jammed as far as the feed-way is concerned. BBs load perfectly every time and there is good reason for it. With a firearm, if the slide should not do what it does - go the rear and close forward - then most likely there was a cartridge that didn't get into the barrel completely and smoothly. Unlike firearm cartridges, BBs are tiny and round - it's easy to make them go where they are supposed to go. My Blackwater 1911 has just kept on working. If you use your finger to push a BB from the magazine you will see why they feed so well. They practically fire out of the mag and while in the gun, there is nowhere for them to go besides the barrel. It's a good system that works.

The other group of complaints seem to center around the seals in the magazine where the CO2 is handled. Many users have stated specifically that you should never over tighten a CO2 cartridge. This makes sense and I have to say, my magazines have been a little picky. With both the Blackwater 1911 and the X-Five, I've had less than perfect magazines. One for the 1911 had to be returned because it simply couldn't pierce a CO2 cartridge. One on the X-Five is close to not piercing, but it works, it just gets a few more shots from the CO2. Overall, I believe the mags are a weak point and they are also $30.00 so this is an expense that over time, could become a problem. However, mine are still going and I've learned their little nuances with experience. 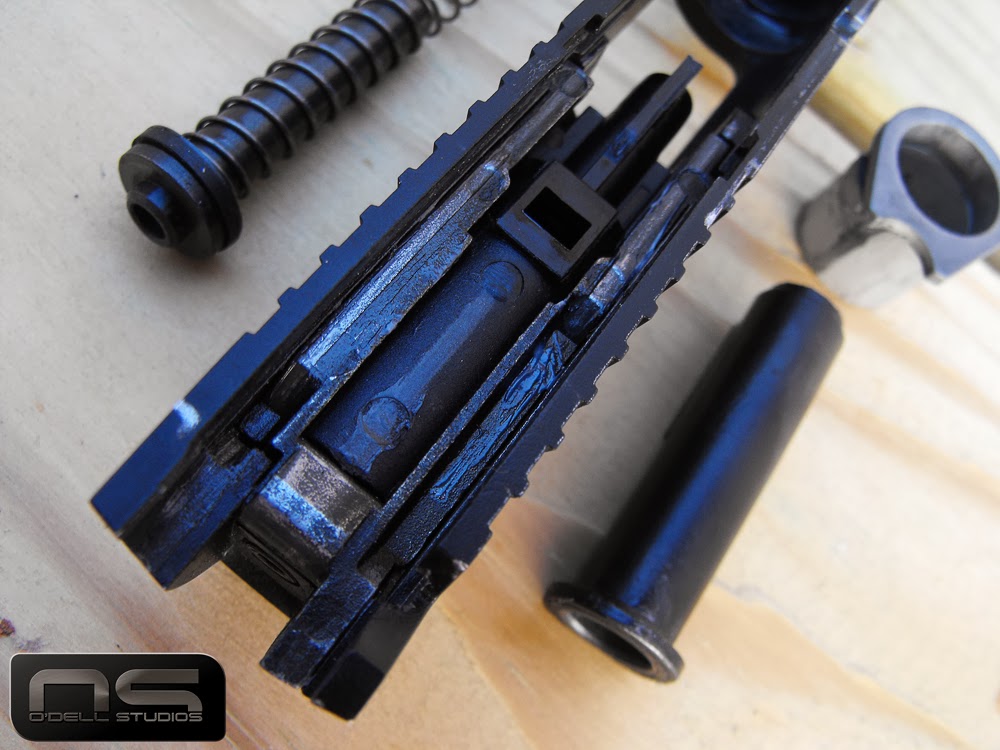 So why are we writing this post then? Well the X-Five had to be returned. When the replacement arrives I will get better pictures but for now we'll compare the 1911. They are made essentially the same. The mechanism at the rear of the slide which handles the CO2 and creates blowback is very simple, but separate from the slide itself, meaning that it has to be held in the slide somehow. It's a small area to work with and the unit takes up all of the room it can. In the image you are seeing this unit on the 1911. There is a metal housing and a plastic tube. The little rectangular hole is where gas flows into this plastic tube. A very simple valve directs some gas to the rear to shove the slide rearward and the rest to the front to propel the BB. As you can see, this mechanism fills the rear of the slide completely, leaving very little space for anything to fasten it in place. 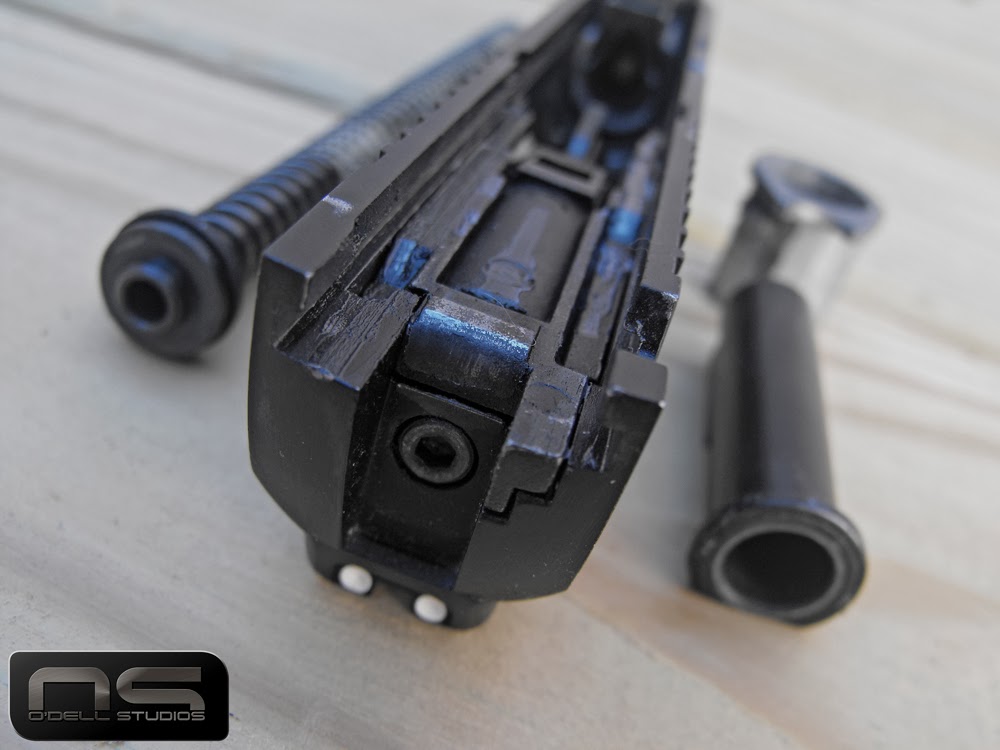 Here you see the screw that retains the entire unit. I would say that a single screw is at least 1 too few to do the job but at least on this gun that screw is fairly substantial. However, I believe they are steel screws given that they are attracted to a magnet. Steel screws vs a soft cast metal alloy - which do you think will win? I don't think it would be possible to put these screws in, especially in a fast paced factory environment, without stripping every single one. Best case scenario you apply thread locker and simply snug them. I believe that because this screw is more robust and that it faces the direction of the forces which are applied to it, that it may continue to hold up. But it's a poor design. Let me elaborate.

The X-Five stopped working one day. This entire mechanism had gotten loose enough that it moved out of place and jammed up the works. On the SIG, rather than a single screw from the rear like this, there are 2 very small screws (like you might find holding a laptop together) which are inserted from below. So the slide recoils and vibrates and so forth, transferring at least some of this energy to these tiny screws and gravity does the rest. When the gun went down and I discovered the problem I removed the screws to find that they were stripped, badly. I would have suspected the holes to have been stripped rather than the screws but it wasn't the case. My opinion, this is a flaw that will always fail. These units should be pinned in, or redesigned but either way this goes back to something I said from the start; real gun on the outside, airgun on the inside. I can live with minor cosmetic differences from the firearm counterpart, especially when it is necessary to have a good functioning airgun. I believe these design choices were made so that the gun looked more realistic.

Have I decided that airguns are still no good? Not really. They aren't made like they should be and I believe that these two guns will fail because of this one poor design - a small detail that can ruin the entire machine. However, there is no reason to remove this part and I think it could be soldered in place which would allow it to be removed if repairs became necessary, but would also keep it in place so that the screws could be ignored. If the factory would no more than snug the screws and apply thread locker the issue might be mitigated, but soft metals and screws are a bad combination that never works when those screws are relied on to keep a vital mechanism in place under the stresses generated by the machine itself. Additionally, on both guns the hammer falls for no reason. It has no function, but it beats against this unit every trigger pull - additional forces at work.

When the X-Five went down I inspected the 1911 and sure enough, that same mechanism was loose. The screw was loose but would not back out fully without what I considered too much force. This loose, then tight, issue with screws, as many of you know, is probably an indication of stripped threads. I will try soldering these parts, though it's probably safe to say that solder isn't designed to take stress of any sort. All the same, I believe I can keep these guns working and I am somewhat relieved to find that this is the only significant issue that's come up.
Email ThisBlogThis!Share to TwitterShare to FacebookShare to Pinterest
Labels: air gun flaws, blackwater co2 1911, cybergun, KWC .177 CO2 air pistol problems, KWC 4.5mm air gun