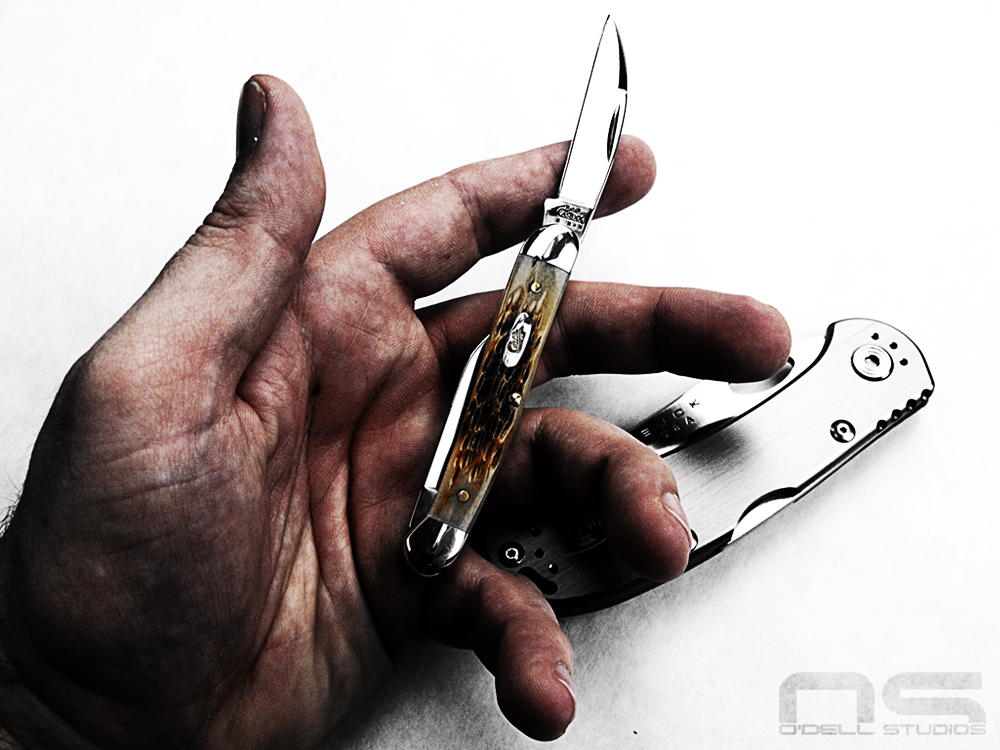 Something about the Wharncliffe blade in a slipjoint knife pulls at my attention like no other knife. For one thing, I believe it might be the illusive nature of this quietly, but widely, coveted creation more than anything else. Many custom knife makers offer them and they are stunning, yet it would seem the production manufacturers don't have much interest in them and when they do, they don't quite capture the essence nearly as well. All the same, I needed to have one. Case, as near as I could tell in my searching, was the only company making one that looked right and could be afforded. Secondly I wanted this knife as a dedicated food knife and being a slipjoint I knew it would probably ride in the bottom of my pocket, something I don't especially care for. This dictated that the knife be small, or relatively small anyway. Lastly, it had to have these handles. I would go for other variations like stag or something else if done extremely well, but I wanted that classic amber jigged bone. Unless I've missed a gem out there somewhere, the Case Mini Copperhead is about it in my price range. However, I'm not sure Case actually makes this knife anymore but if they do it is number 62109w. Luckily I was able to find them and judging by the box I think mine was 10 years old when I got it, though still new in the box. So I have my Wharncliffe and it rides with me everyday and I do love it simply because of what it is. It's attractive and shiny, small, and the main blade has very satisfying walk and talk. That doesn't mean it's perfect. In fact, in my opinion, I don't think it is an especially good value at $50.00. I don't think much of the blade steel and the fit and finish could have been better, particularly when Case claims that so many skilled people touch each knife. It would seem that at least one of them would have touched it up here and there along the way. It wasn't at all sharp when I got it, and overall doesn't feel like much knife for the money. Still, I understand that while slipjoints aren't difficult to make, there is a lot of hand work that went into this knife and that is what I am paying for. 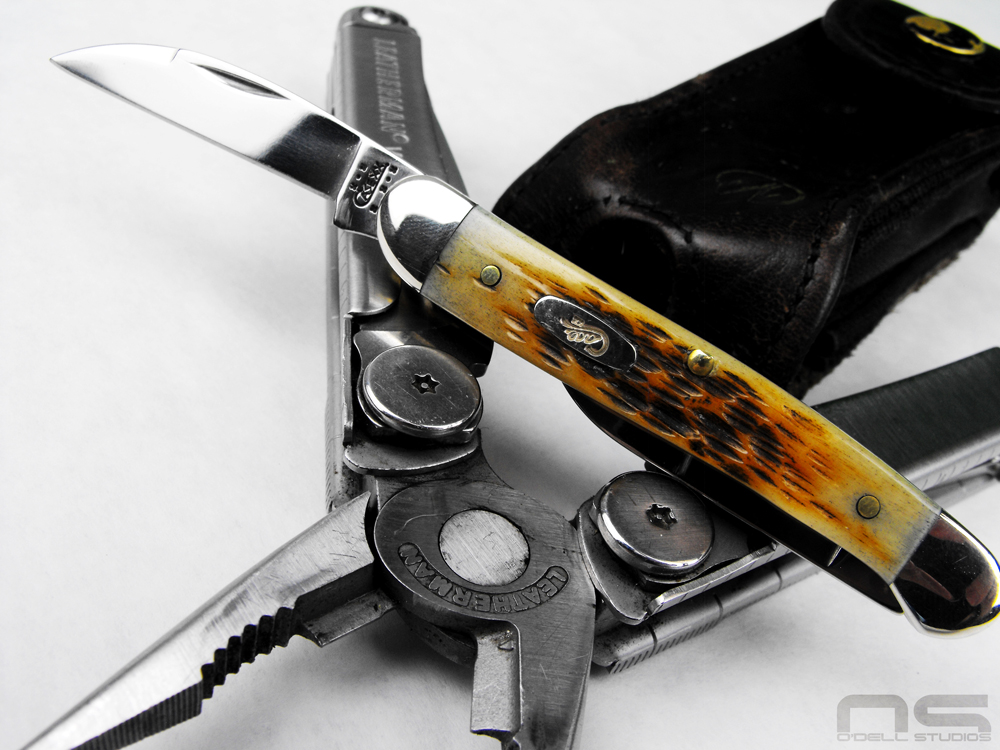 I also wonder why so much of the blade is ground away. You may notice that what I believe is called the ricasso is much wider than the blade and when I say wider, I mean the height or vertical measurement, not the thickness of the stock. I understand that it acts as the blade stop when the blade is closed, however it would appear that there is sufficient room in the handle to accommodate the extra millimeter or two without the edge contacting the inner surfaces. This may seem minor but it would have been enough material to create a finer edge, or at the very least improve the looks. If that material was never there to begin with as the blank was punched, that's one thing, but if it was I'd rather have it on my knife, than in a pile of steel dust on the floor at the Case factory. It must be worth something because most of the high end slipjoints I see address this specific feature as well as other Case patterns. That leads me to believe it is the result of careless grinding.
All the same if you love the looks of a Wharncliffe slipjoint like me, this knife is not overly pricey and gets most of the beauty points needed for a little knife you'll actually carry and use. 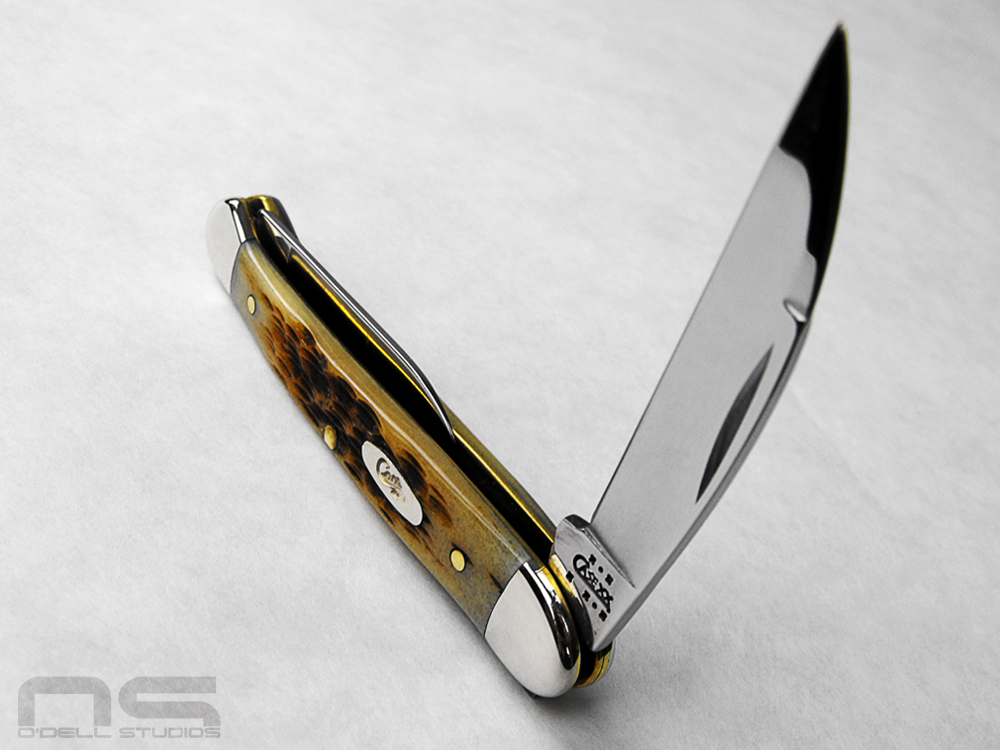 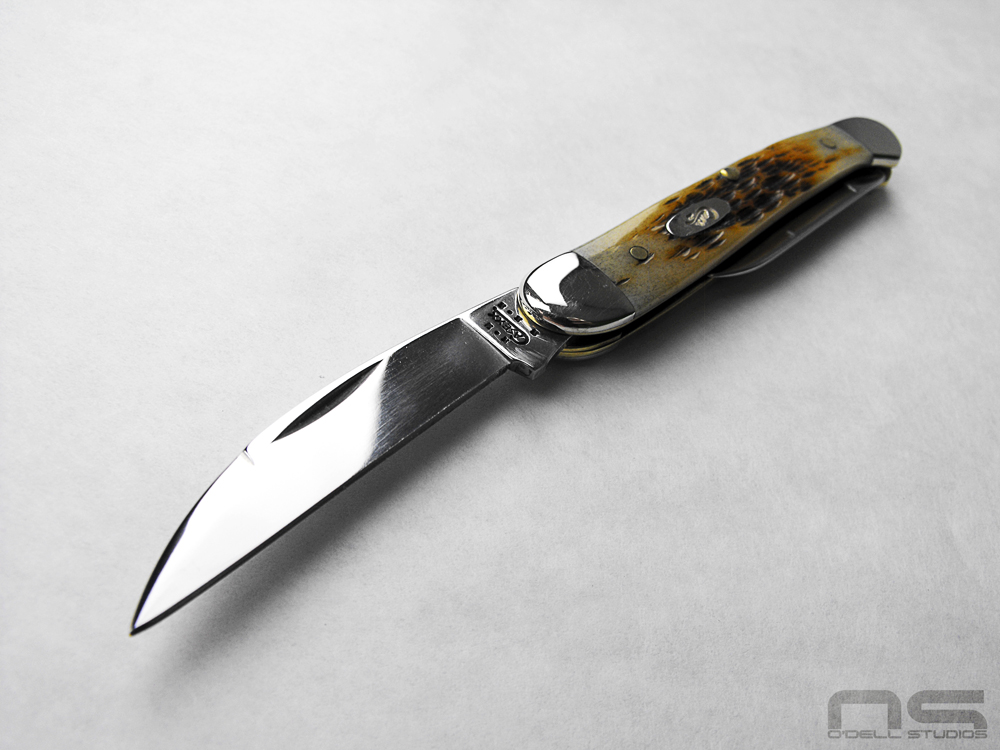 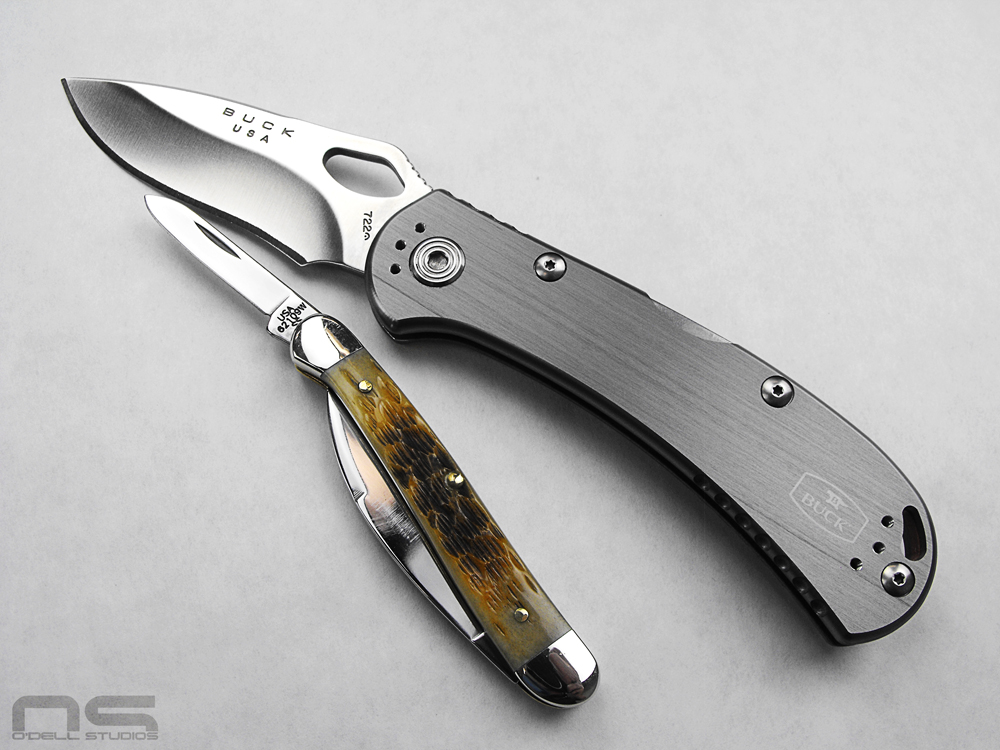 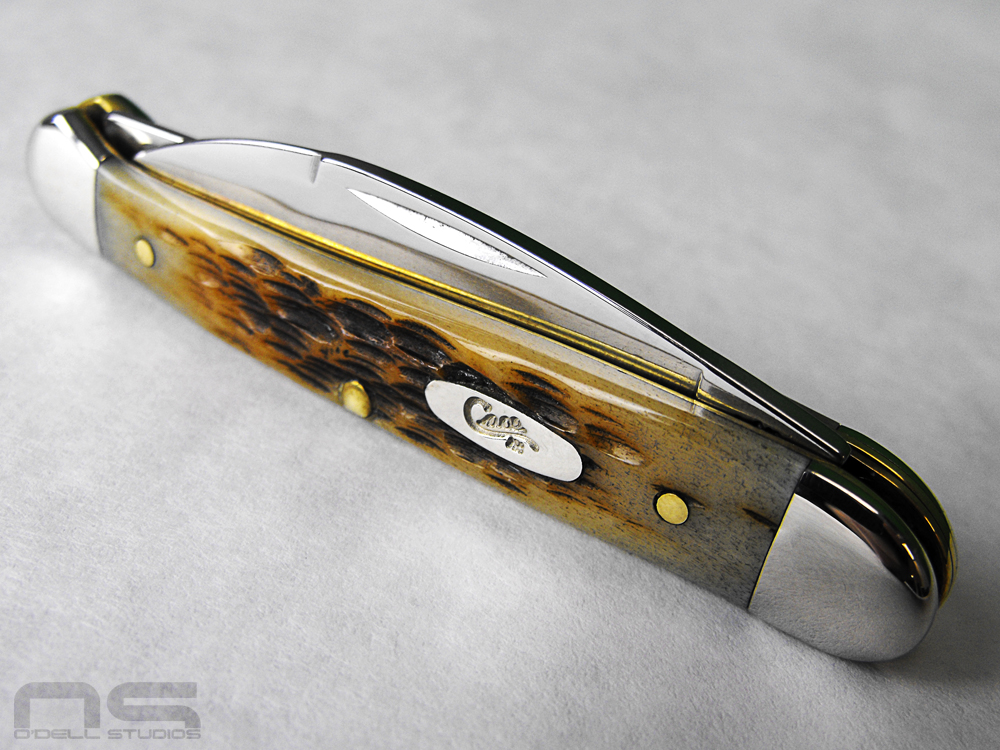 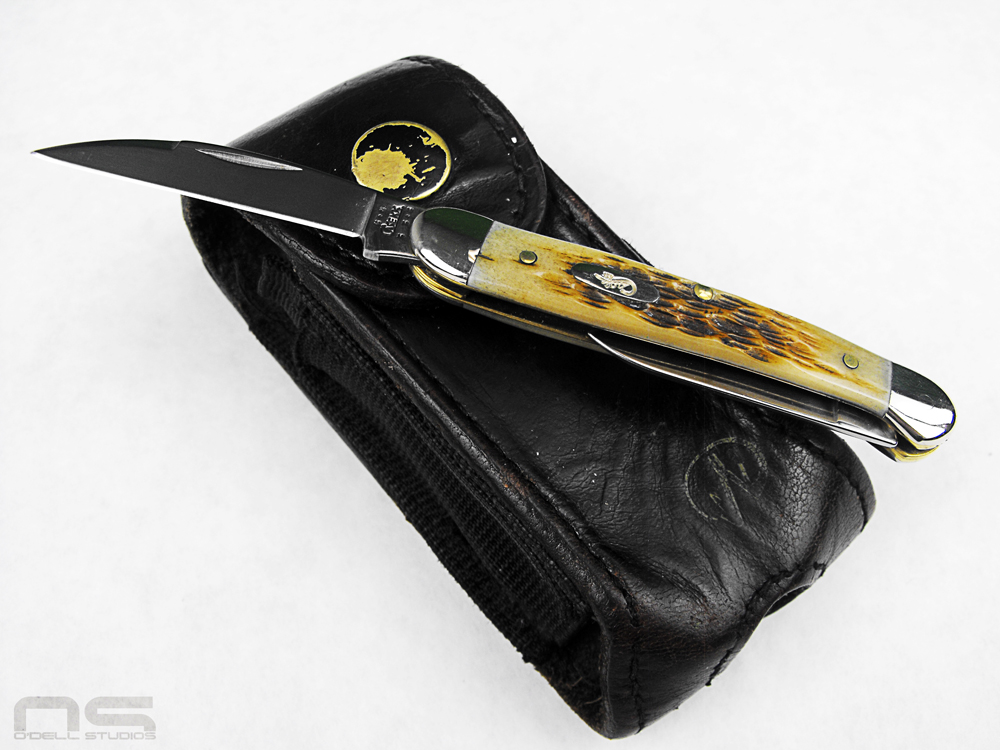 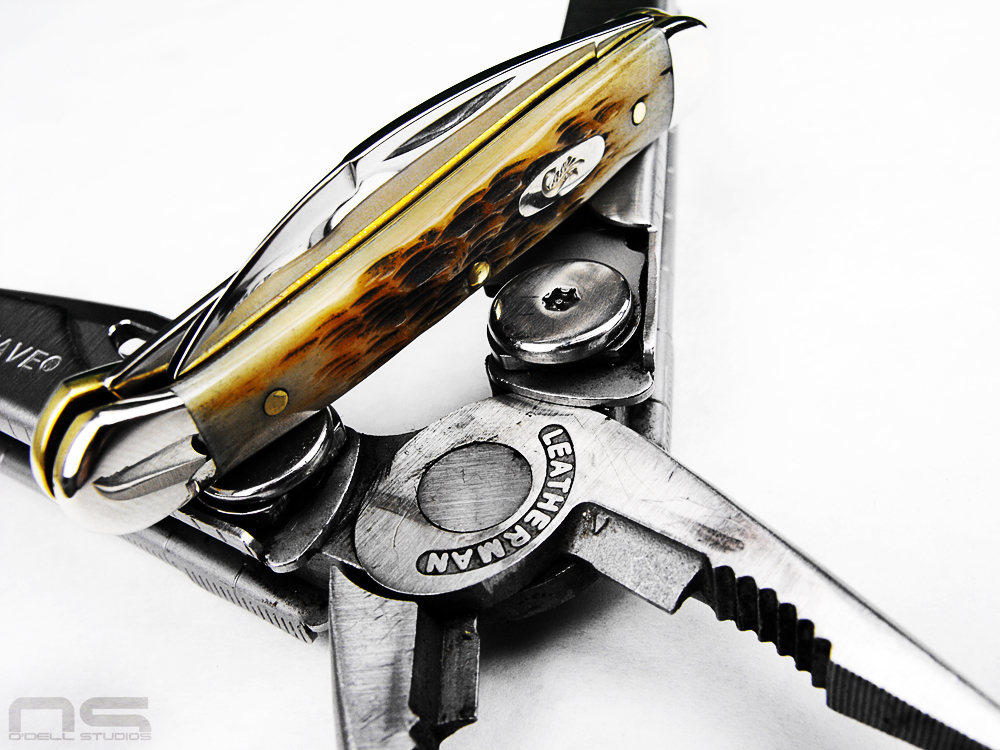 I have a lot of catching up to do this month! Sorry for the lack of posts but I just finished this up this afternoon. It is an update of an old drawing, just something shiny and refreshed to take to car shows, add to the portfolio and hang on the wall. It is of course a 1968 Ford Mustang Shelby GT500KR with some mods here and there. You can probably find the original somewhere in my slideshow but I touched pretty much everything and did just a few effects in Ps to bring it to life. I am definitely focusing more and more on giving my drawings more life because I've realized that cars are about more than looks - they are also about motion, sound and light. I'm not certain I can pull off the sound part but I think maybe if I can convey more than a flat image of a car, the rest will be pulled up from the viewer's memory. As children, it wasn't ever an issue. We could produce all the sound and power and all the things that thrilled us about cars with our mouths and Hot Wheels. Not much has really changed for me. As a drawing comes together my mind is still making the engine roar and the tires squeal. Artists I think, are not seen behind the wheel, but watching from a distance like a movie director trying to capture the emotion and imagination cars have inspired for decades. 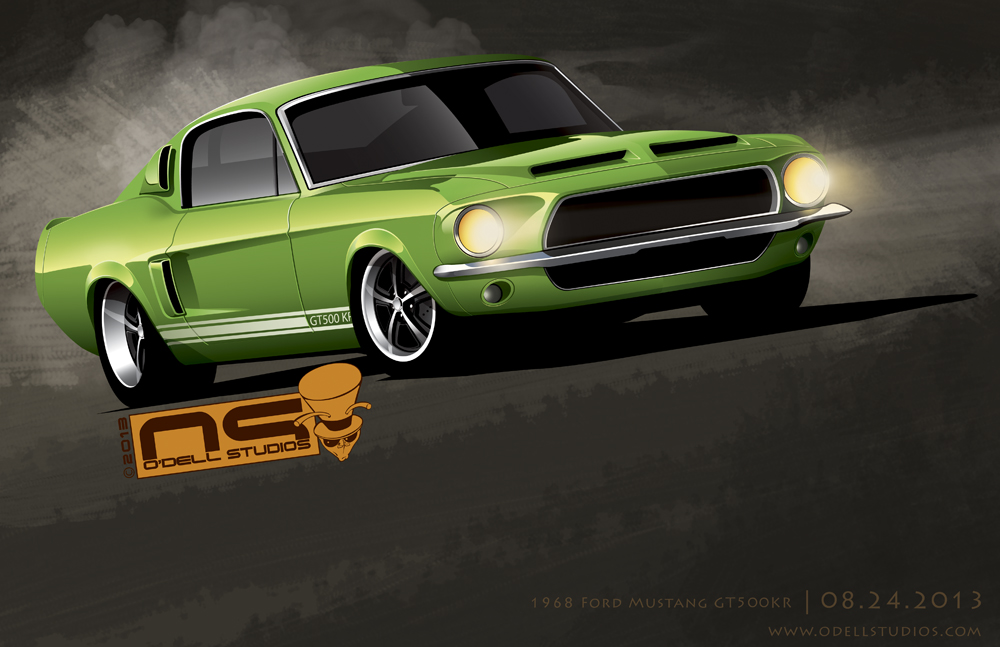 Mailman brought me a couple more knives last week; an Enlan L02 and EM01. Not sure the story but the L02 says "BEE" in the cheesiest Pac-Man letters they could find but the seller mentioned this in the posting I think. I don't know how they get it done but they are getting to me from someplace in China in 8 or 9 days which is remarkable I think. When you spend so little on halfway decent knives I think it's fair to expect some quality control issues and I imagine that is the area they skimp on the most to hit the price point. I've now handled 4 different models and they all had different issues. It's hard to imagine how many different people are assembling and finishing Enlan's knives but none of these problems are so significant they can't be fixed. For the most part they are stiff and a little gritty opening and on both of these examples there are some errant grinding marks. I am also annoyed that they don't take the time to make them look as good closed as they do open and unfortunately there is very little extra material to work with to improve them. On the L02 it looked like they super glued all the screws in place. It was like one day they ran out of thread locker and said, "Just hand me the super glue. Works fine!" Uh, yeah it works, unless you want to take them apart. In the end I didn't really beat it up too badly getting it apart and brake fluid will dissolve just about anything. Working on the assumption that the EM01 might have the same issue I just doused it with brake fluid and left it to sit while I worked on the L02. Turns out that it didn't have the same problem, so you just never know what you're going to get. Other than that though, nothing really to complain about for the money spent.