First off, I have a certain bias about this knife and I might as well come clean about it. Tanto blades don't do anything for me. But the curve they put in it kinda made me rethink that opinion and just get one for the fun of it. A few days ago I went over the Schrade SCHF 10 and I really think that knife rocks, but along the way I briefly hit on the SCHF 12 you see here. It's interesting that they are both from new lines yet this one had such major issues by comparison. Now, they are totally different knives and there are two sides to this story. This knife is still purpose driven more or less. It's a fighting knife and probably not really anything else. The blade style and thickness are designed for what I suppose you could call "combat tasks". It's thick but not so thick that it's too heavy and the blade style is probably good for prying and breaking stuff with less of a fine tip to worry about snapping off. It looks cool - cool enough for me to buy it even though I don't care 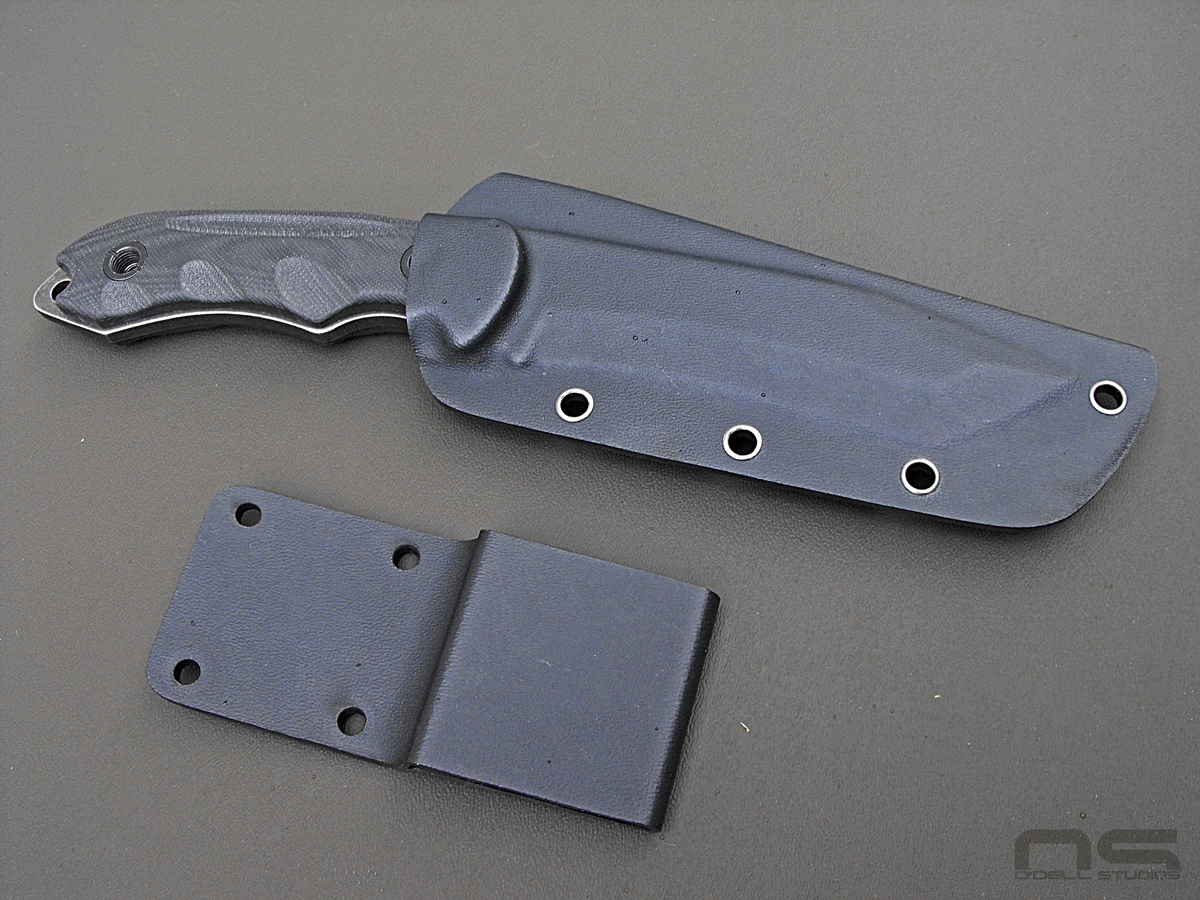 for the Tanto thing. It comes with a thermomold sheath - a huge step in the right direction. It comes with (edit) G10 scales which is great. The finish is .... maybe cool to some. But none of it is quite right and beyond design problems, there were also functional problems.

Let's start with the little stuff. Thinner steel, still 8CR13MOV, and just less of it for the same money as the SCHF 10. Not a big deal. No jimping. Ok, no big deal, might not be necessary for this style knife. 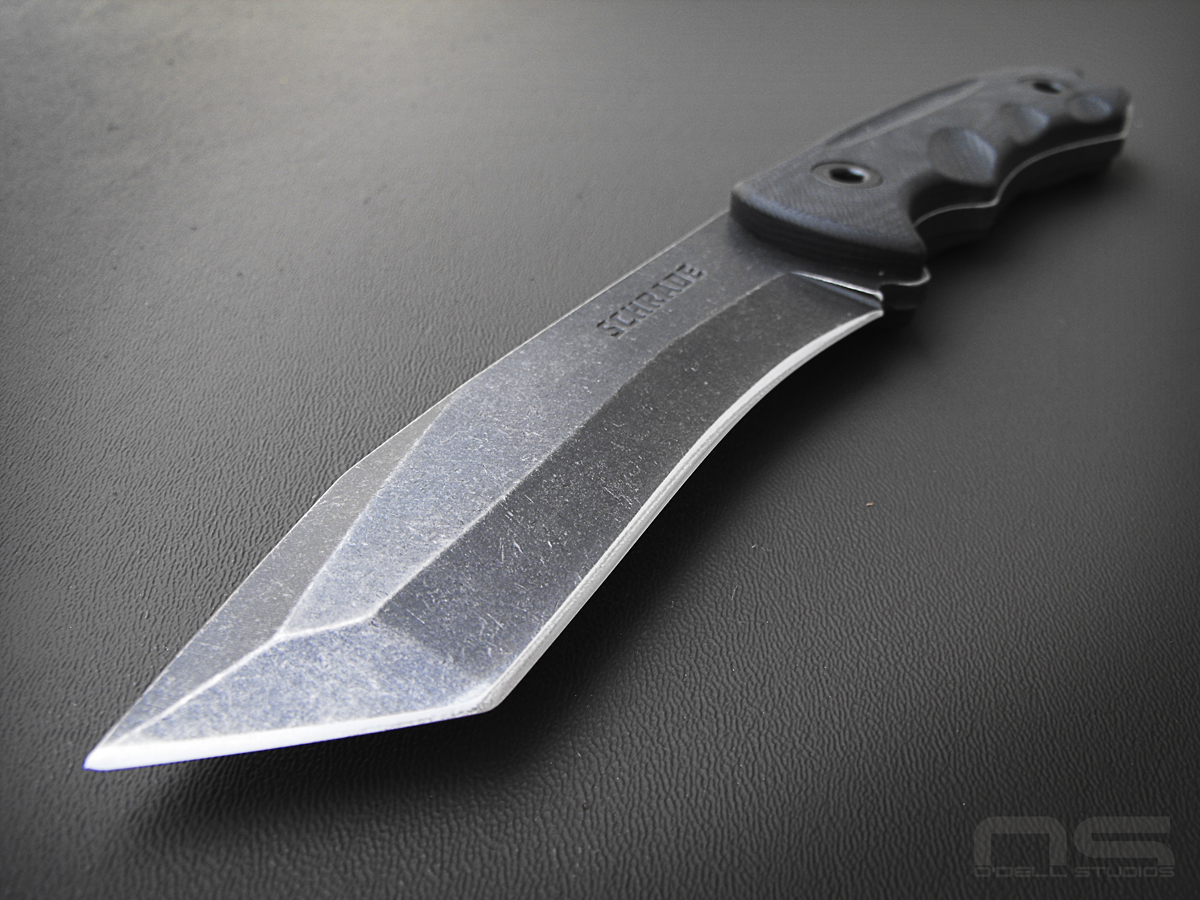 G10 scales, but they aren't cut in such a way as to facilitate the grip they are capable of. The finish, well for some reason I can see it being cool on certain knives, just not this one. The Tanto blade and clean, sort of boxy cut aren't suited to a purposefully rough finish. Still, none of these things are major but you begin to get the sense that you got less knife for the same money.

But wait, there is that Kydex or knock-off Kydex sheath. Sweet. Only, it really isn't. There is a ton of play and rattle and it's just not right. It's close and it is 10 times better than the sheaths included with the SCHF 9 and 10. I wouldn't complain about it except that in this case it brings up another important point about sheaths on cheap knives. Did I lose something in the knife in order to pay for this sheath? The knife is missing hard enough for me to not like the sheath, even though I would really like this sheath if it came with the other knives. Now that's hard to explain and I must be pretty hard to please, but it just misses the mark again, this time on the other side of the line. It works 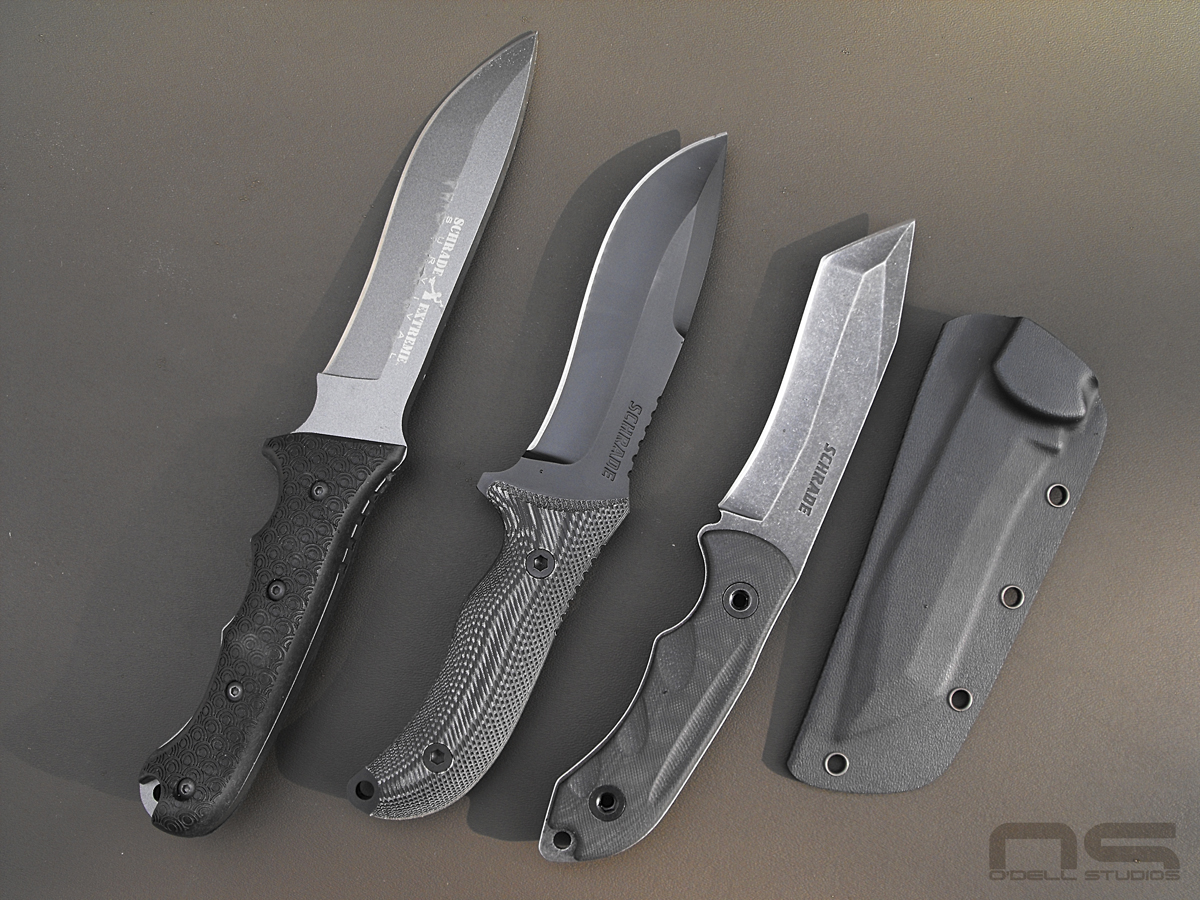 on an Instructor's style belt in 1.5 and 1.75 inch widths, so long as you aren't using a Cobra buckle or any other belt with half a buckle on each end. It's a fighting knife for a tactical market but has no MOLLE attachment. If you could mod it for use with webbing it's really only going to get one attachment point which may or may not handle the weight or keep it secure.

The grip isn't great. I'm glad that I don't know what plunging a knife into a person is like but I've skinned my share of deer with blood slicked hands and I know that grip is never bad. More importantly, why waste the opportunity of getting it when the G10 scales are already present? The cuts they do have are kinda neat looking but have no purpose and in no way accommodate the human hand. Plus, no jimping. Do I need it? Hell, I dunno. The lack thereof fits the clean minimalist style of the knife but with all the other dings against it, this feels like another one.

The big killer. The blade grind was God awful and unusable. I don't think I've fully captured it in the image but if you look at it closely you can see how uneven and off-centered it is. It was dull and a knife with no edge is really not a knife at all. All of the other images are after much hand grinding on sand paper and it isn't sharp yet, still in progress, but it wasn't terribly difficult to fix. This suggests quality control issues that are too typical in products like this but in all honestly, doesn't turn me off from the brand. Schrade is trying a lot of different markets and the knives that really interest me have been huge successes. They have lots of products that don't even interest me but as long as they keep hitting home runs with the ones that do, I'll keep watching and buying. Schrade must always remember though, why the SCHF 9 was such a stellar product and continue to manufacture and design around the lessons learned there. I feel like the SCHF 12 was a departure from the 9's model and I'll go over what changes could have brought it back. 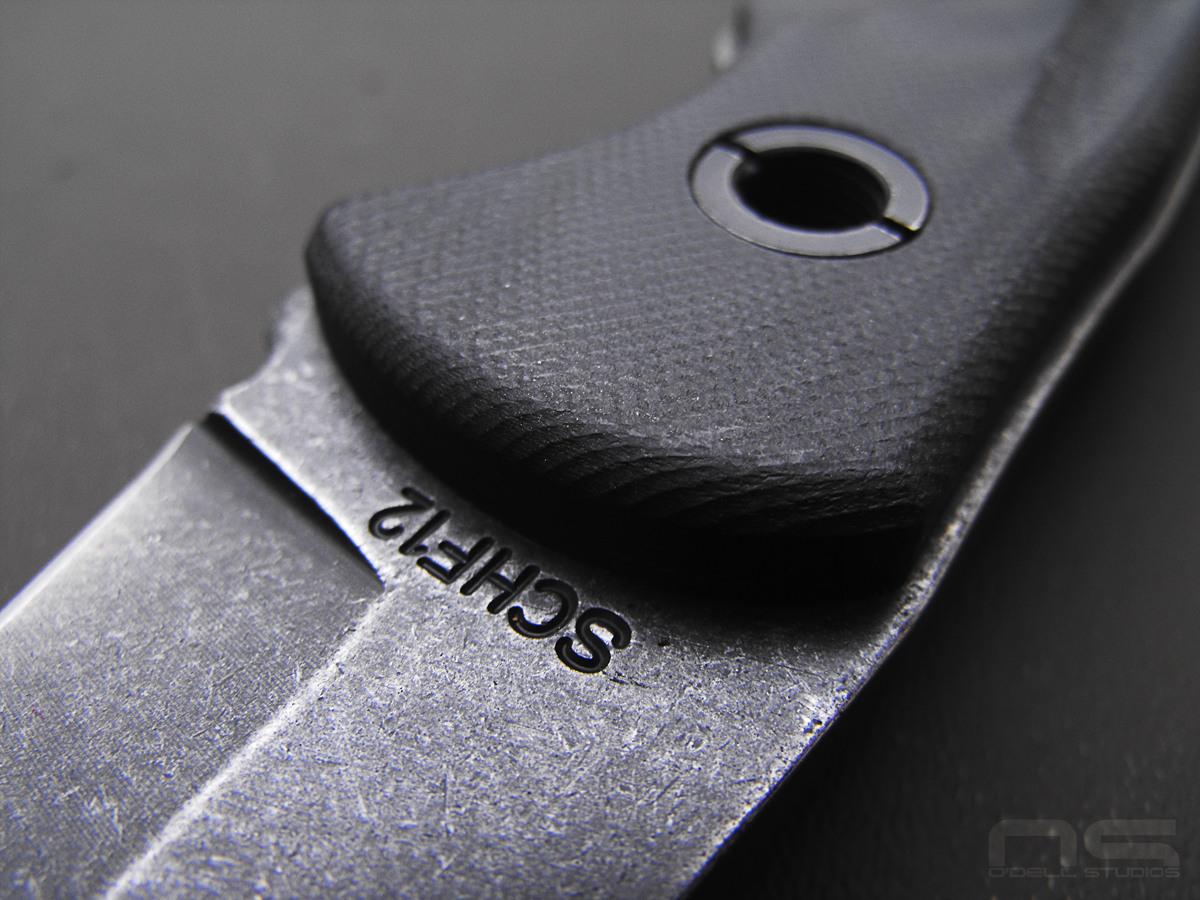 First and foremost the blade edge has to be right. There are no two ways about that and they are perfectly capable of making it happen AND this is just one unit. Thousands with perfectly good blades are probably cutting things as I type. I would just stick to the black finish. I get the patina, or acid washed concept, I just don't think it applies to this knife. A basic outdoors, no frills knife, maybe something more "primitive" or "traditional" would probably look really cool with it so I wouldn't throw it out entirely, but I would for this line. The G10 - it needs to be checkered just like the SCHF 10 or similar. Jimping - sure, leave it out, but for everything I am not getting in this knife (jimping, finish, blade thickness), I want something in return. Most likely I would just lower the price and leave the sheath as it is. Correcting the sheath is a matter of personal preference, but honestly, I'd just go back to the things I talked about in my last post. The sheath really just needs to be a plastic lined rectangular box the blade fits in, covered in some kind of tough nylon, something close to 1000D Cordura. No seam tape, no frills, no velcro, no cordage. Fold and stitch the 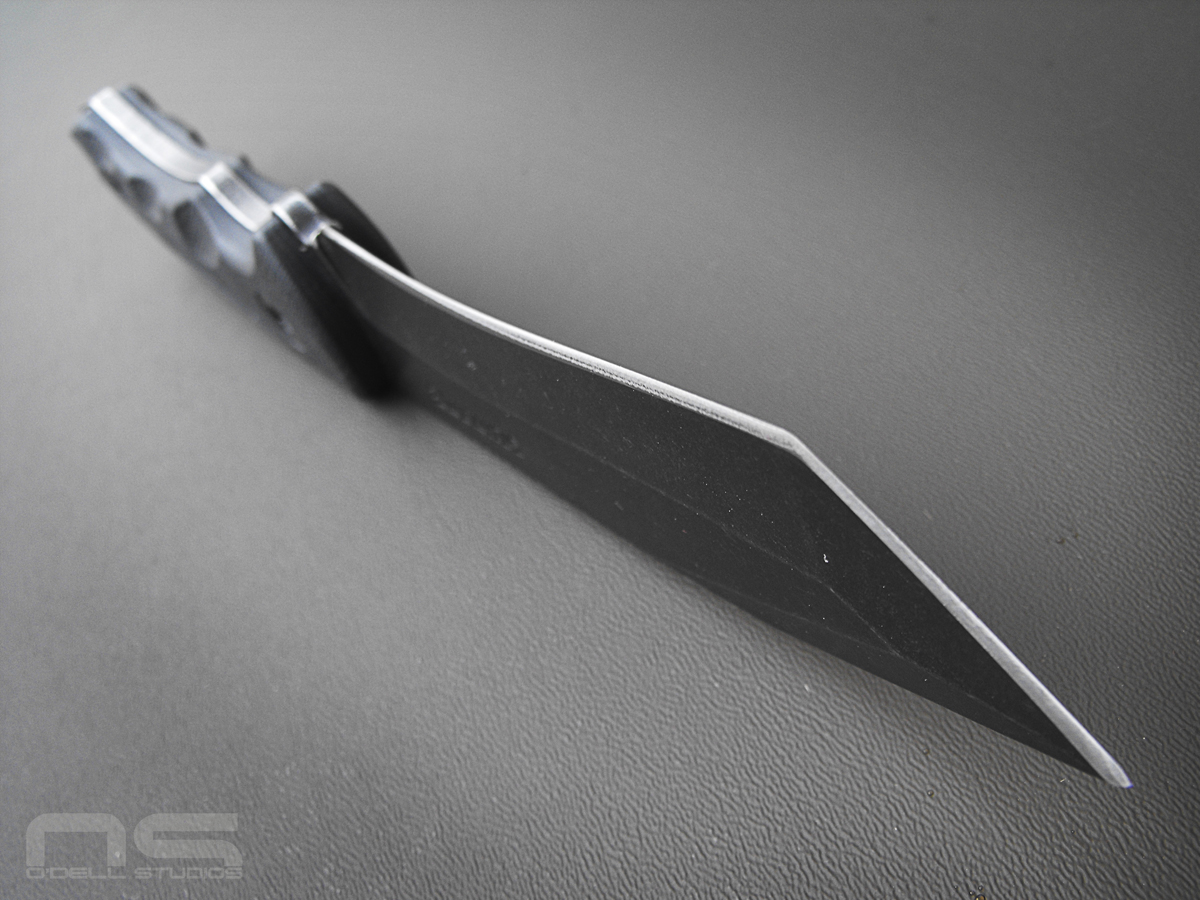 edges the way it's been done for hundreds of years and use a snap/strap for retention. Since the SCHF 12 is really geared for the tactical crowd, it's going to need a dead simple PALS attachment system, probably webbing and a snap. Double the webbing up, do it right, call it a day. Kydex or thermomold plastic really needs to be done correctly if you're going to do it. My guess is they mold the sheaths around a handful of knives or models of some kind and then the production knives themselves vary slightly from one to the next resulting in some rattle and slop. 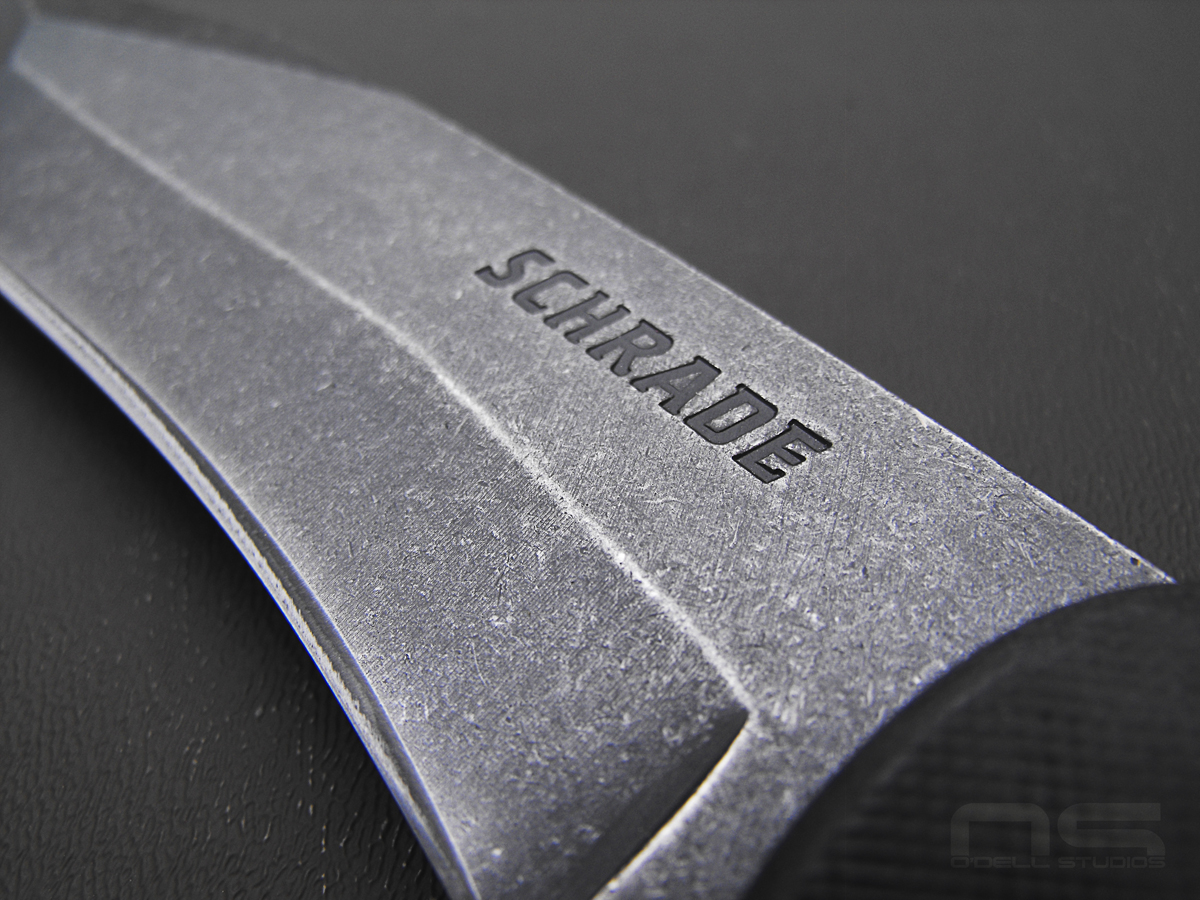 To be clear, the Schrade SCHF 12 is still a good value especially if you are in the market for this type of blade. And to be fair, the sheath is still much better than the alternative and I know for sure that I could use some paracord to securely attach it to MOLLE gear no problem. The retention is actually very good in spite of the loose fit and it is going to hold up far and away better than the nylon counterparts. As for the rest, it can only be seen as a lesser value when compared to its siblings, not necessarily the competition from other companies. When compared to the SCHF 10 it is my sense that I am getting less for the same money, especially when the 10 is so impressive in my view. They are completely different blades and fit completely different roles, so the feeling comes from the amount of knife for the money more than how well the knife competes in its market. To that end, it's still a pretty nice product if it's what you're wanting and for the money, you still can't go wrong.