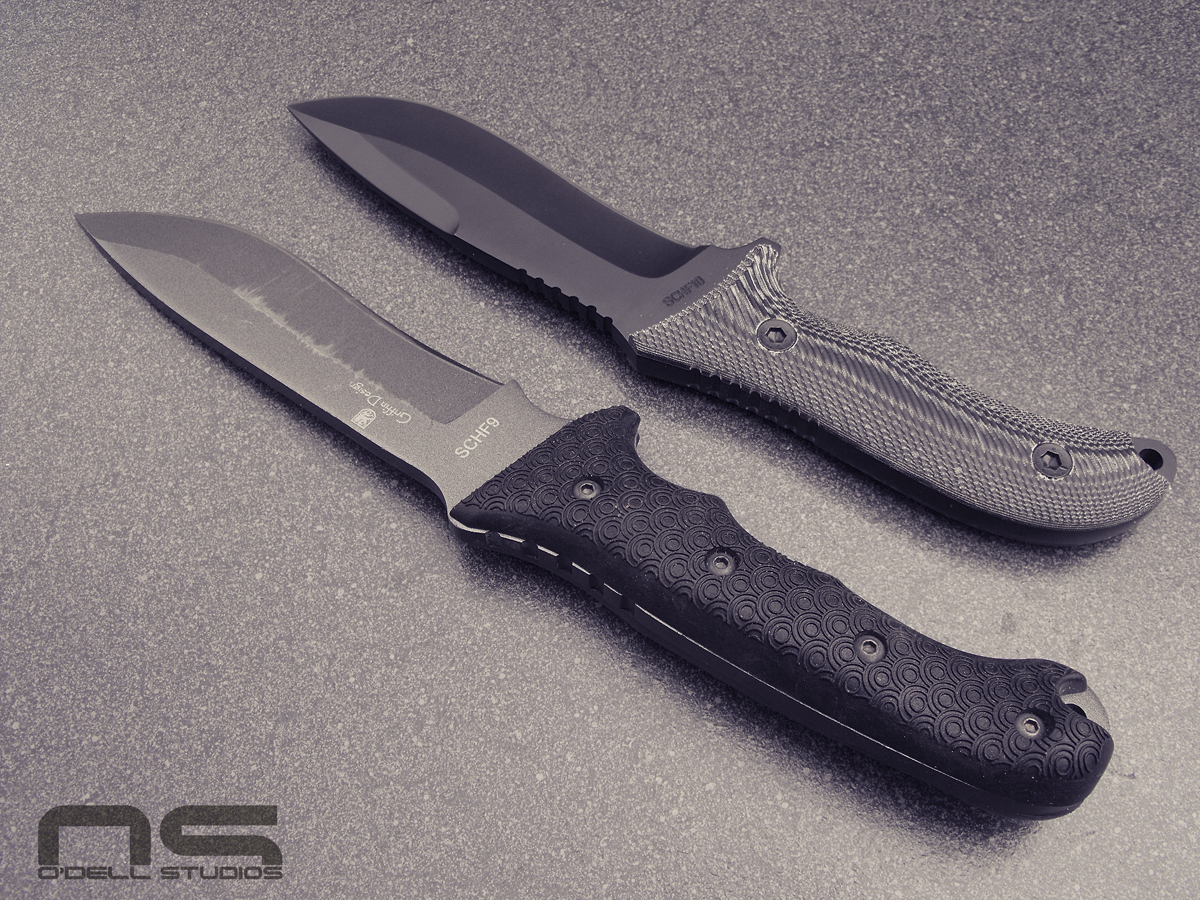 2014 Note: There have been some smart updates to the SCHF10 that this review predates and doesn't cover.
The Schrade Extreme Survival SCHF9 has made appearances in some of my other posts but its well established popularity precluded the need for a real full-on review. While I wasn't paying attention, Schrade put out a whole bunch of new and interesting knives and once I had the SCHF10 in my hands I discovered that it and its sibling, the SCHF9, had certain complimenting characteristics that could make a review complete only if compared to one another. Let's talk about the SCHF9 briefly if you aren't familiar with it already and to set the tone for the review of the 10. It's a 1095 carbon steel, sharpened crow bar. I think its popularity stems from design characteristics that I believe all products should be based upon; clear purpose. By this I mean, there is absolutely nothing superfluous in the SCHF9. The Extreme Survival nomenclature probably says it all, but Schrade actually seemed to have set out to accomplish the knife's design by cutting all fluff out of the picture so that it could be made of better quality materials rather than cut quality in order to include useless gimmicks. I couldn't have made it better myself, in fact, it almost seems as if I was at Schrade using Gladiator thumb signals for every possible aspect of the design. I probably would have done 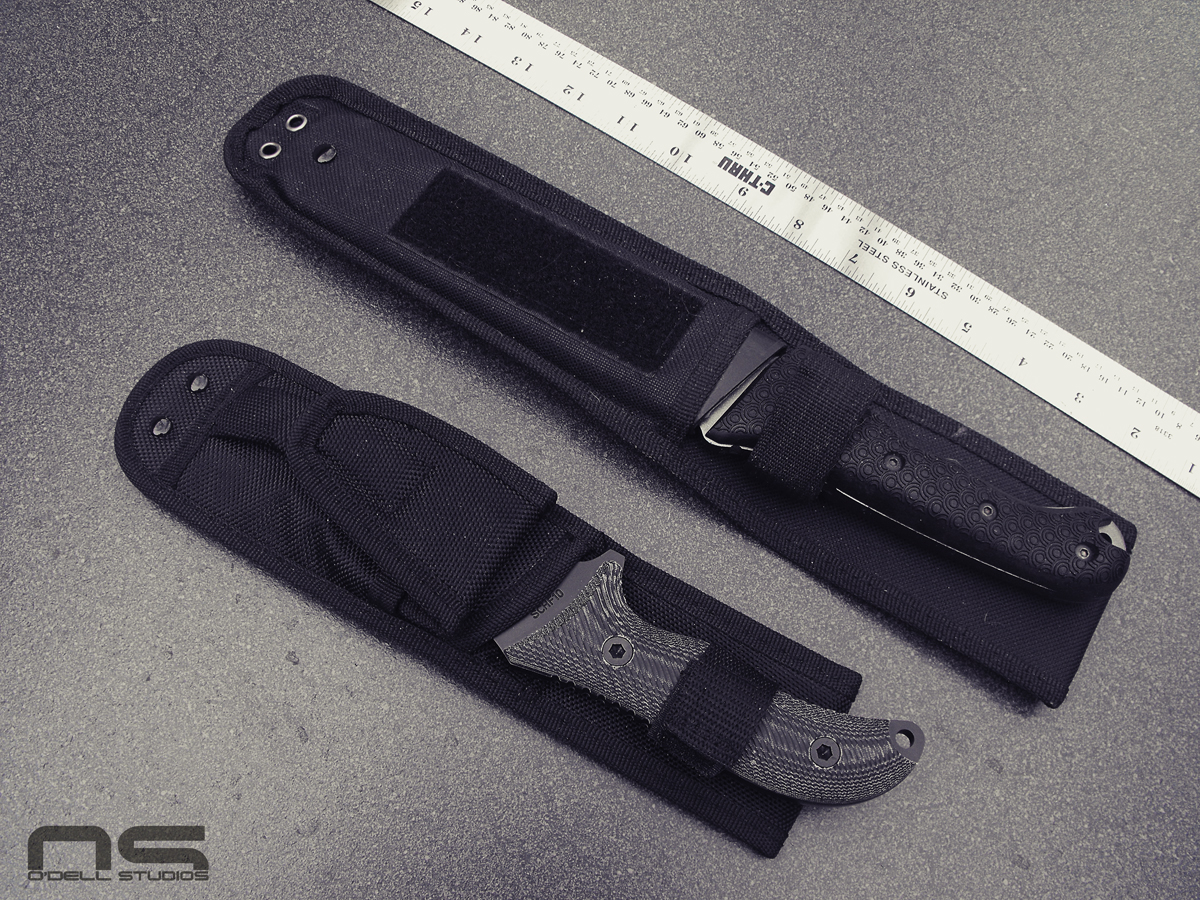 something else with the sheath but that is sort of a toss up because the end users are going to vary widely in opinion on the subject of sheath design. In the end, it's a hard use tool with zero gimmicks and anything "nice" that would have added cost was prejudicially omitted. This knife was made to work, not just in materials but in design, and was not made to look pretty. To me, that's a product done right, regardless of what it is, especially when you want to meet a price point. Using Nutnfancy terminology, this knife has almost no "second kind of cool" value. Although for me it's sort of like heavily worn 1911 pistols; they're cool because they're rough. I think it's the same reason Glocks are thought of as cool too. They're ugly and they aren't fancy, but they can still be seen as cool. 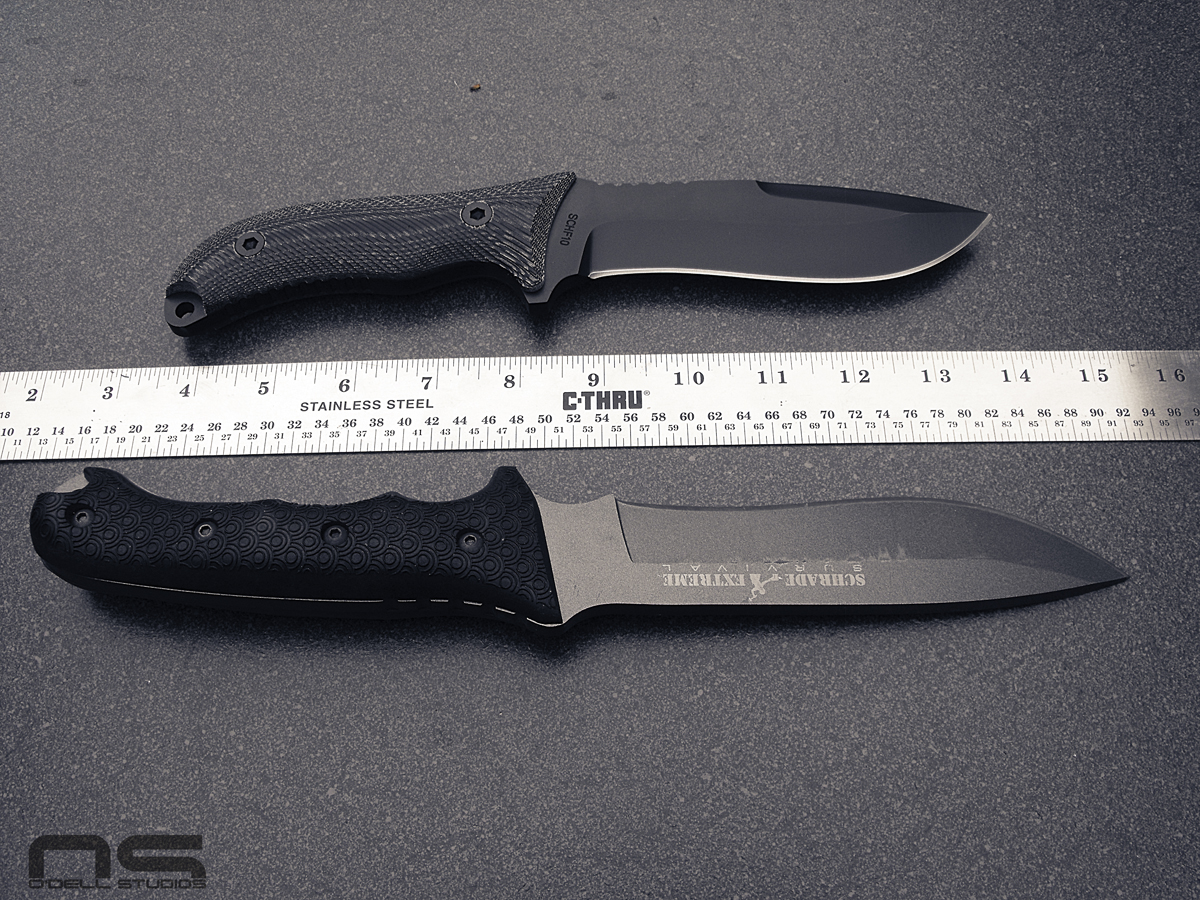 And then Schrade put out some more knives, even in the Extreme Survival line. According to their catalog pdf the SCHF10 is in the Extreme line (though the branding is absent), while many other similar products are not (or don't appear to be) and really the SCHF10 isn't quite as purpose driven as the SCHF9. I knew they were made of 8CR13MOV steel and while I'm no steel expert, or even novice, this steel seems to get sort of middle of the road respect and is common in budget blades. So right off the bat it would seem that a little nicer steel was given up for some aesthetic appeal but it was really the looks that drew me to the SCHF10 in the first place and I figured it would be a beater like the SCHF9 anyway. In my opinion this turned out to be not true. Now I believe that a well known and respected knife designer may have sold designs to Schrade or in some way had some involvement in these knives. If that is true it makes sense. I am not a knife snob, and I certainly understand the love of well made blades, but to me this knife is nice. It is a lot of knife for the money too. I can't comment on the heat treatment of the blade and that might be a huge factor in the world of knives, but all that aside let's talk about how this knife impresses me. There is nothing super "nice" about the SCHF9 so it just feels right to start pounding on it and it just gets cooler the rougher it looks. Somehow, this knife isn't like that. It's beautiful right 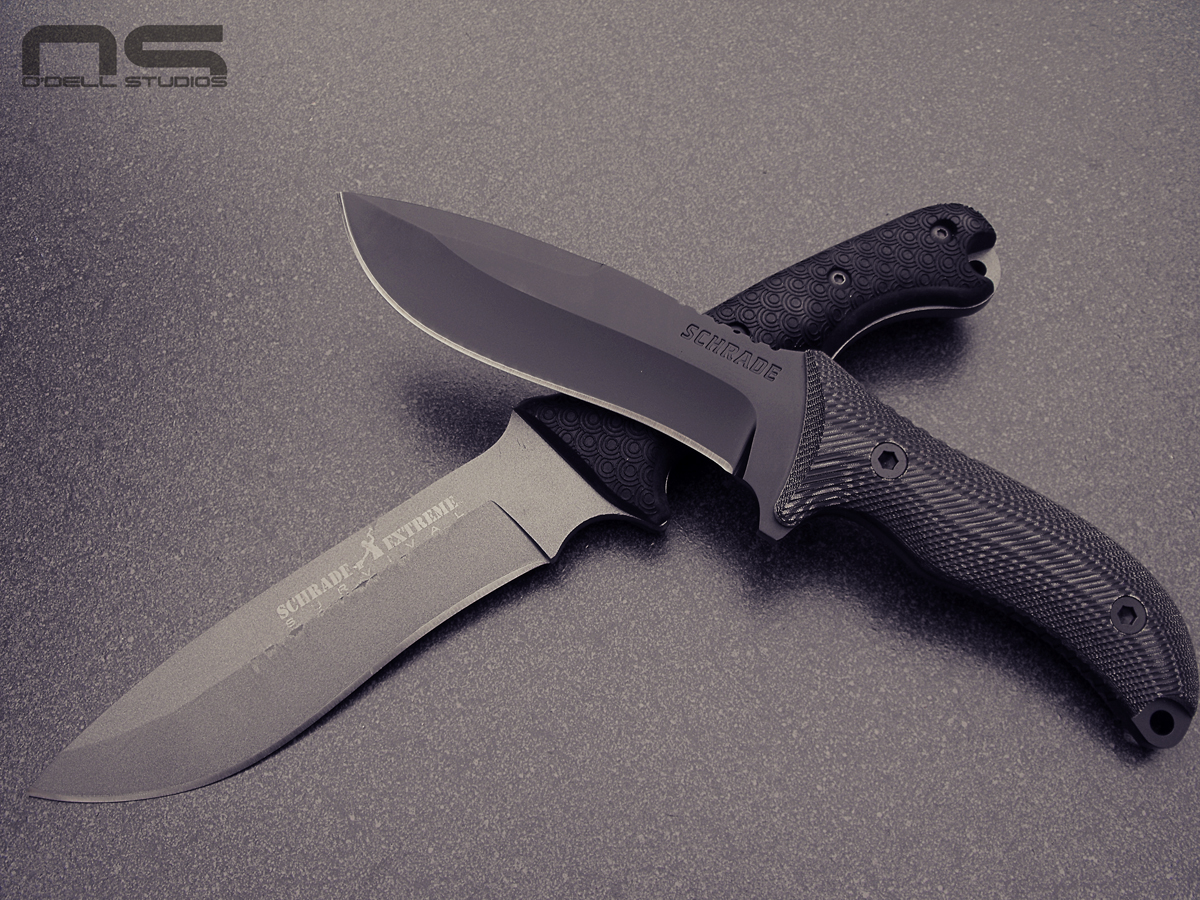 out of the box and it is really well designed. I am a sucker for that re-curve shape and belly so that attracts me right away. But it's clearly a multi-use blade. It has fighting features with that swedged drop point and overall length, and it has survival features with the heavy belly, re-curve and quarter-inch width. The Micarta scales give amazing grip the way they have been cut and have a dry, slip-proof feel to them. I was amazed at the clean, smooth black coating and flawless steel to handle fit and finish.  The knife feels like it was made for my hand with nice jimping in the right places and spectacular grip contours. I think it looks like a knife that would cost a lot more than $40.00. 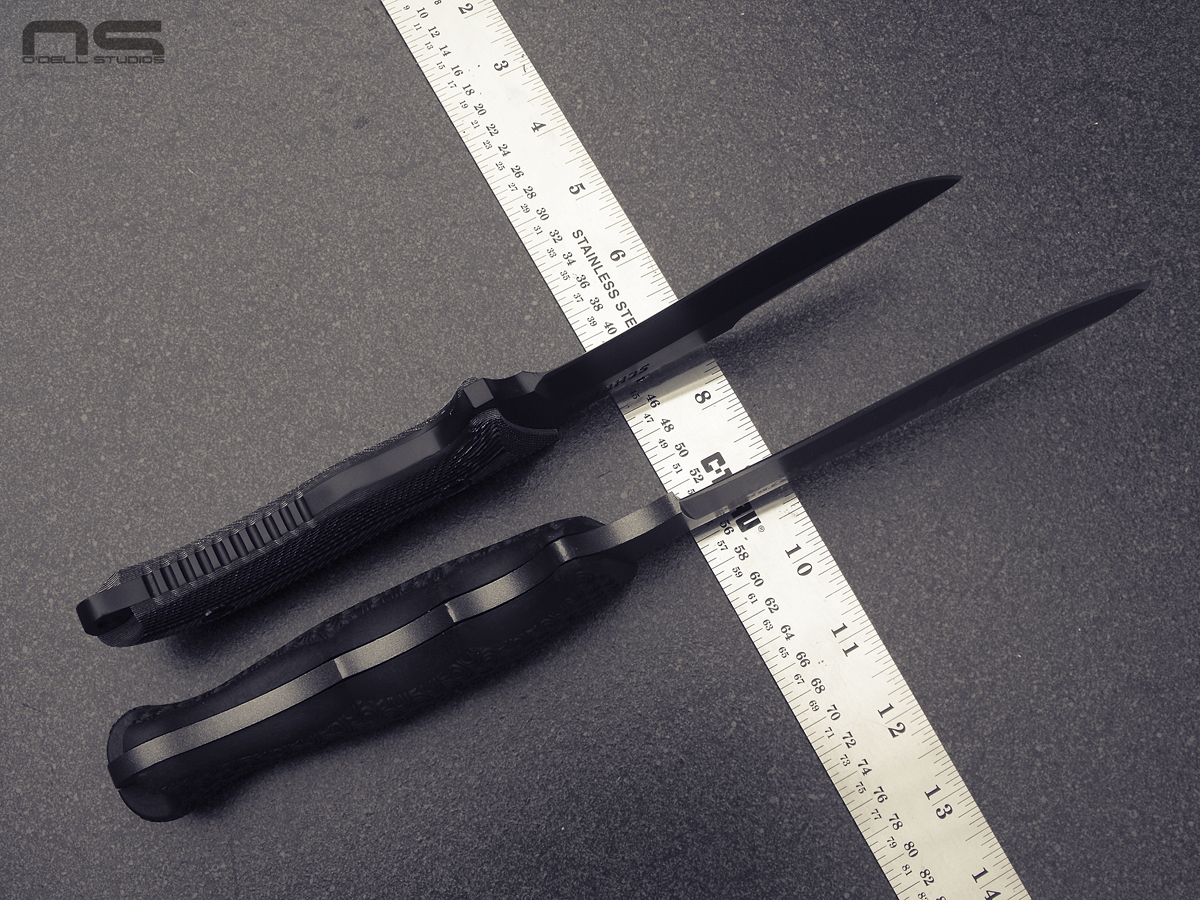 For my low budget standards, this is a really nice knife and even for higher standards it can't be half bad. For final thoughts I have to mention the edge because I also ordered an SCHF12 and by comparison the two are almost night and day. The SCHF9 came hair splitting sharp with a relatively even and centered grind. The SCHF10 came sufficiently sharp with a nice even grind from tip to tail and after a few minutes with the ceramic steel it was shaving hair off my arm. The SCHF12 on the other hand, was dull as a hoe with a severely off centered and uneven edge grind - terrible. I'll get to that knife later but the bottom line is this. 8CR13MOV works fine for me and I think for most non-knife freaks, it's probably a few notches above expectations. The sheath is actually a little nicer than the SCHF9 came with and will service most users fully. Beyond these two points, the knife is an absolute bargain and in fact, pretty far on the nice side. I'm probably going to mostly look at it, fondle it and make Kydex sheaths for it - expect to see those soon. The SCHF 10 and SCHF 9 make a nice 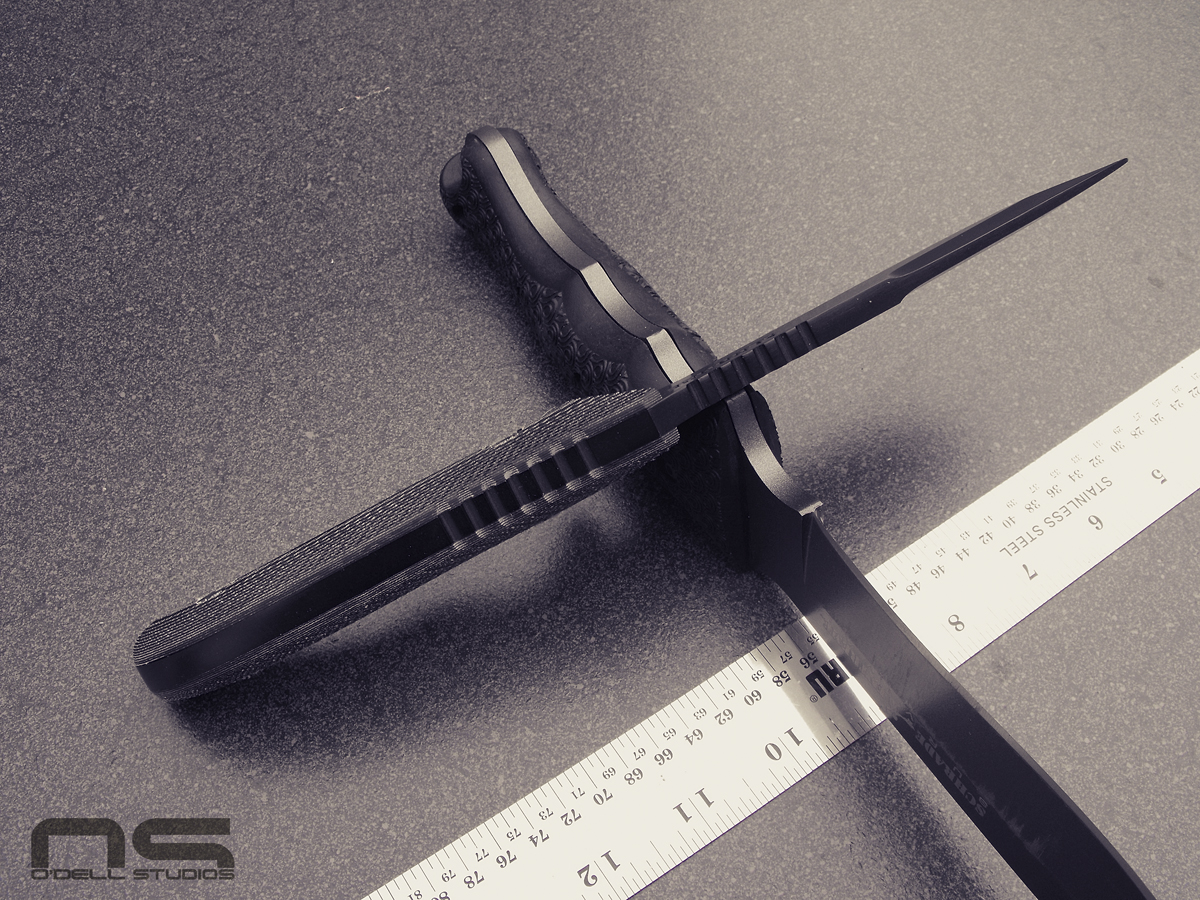 comparison because the 9 had clear purpose and sacrificed any aesthetic appeal to get there while in the same line we now have the 10 giving users an awful lot of "nice" with more than the money's worth in functional design features. This knife is as "tactical" as it is "traditional" and combines the right amount of the two resulting in a very attractive, high-value, multi-use blade.

UPDATE: 4/29/13. Sheath. Above I mentioned things like the sheath being serviceable, or I would have done something different with it, and I even said it was probably nicer than the one packaged with the SCHF9. Well, here are my thoughts in more detail. God knows Taylor Brands or Schrade probably won't be stopping by my blog to read what I have to say, but I know there aren't a lot of reviews out for the SCHF10 yet and I might as well just lay it out here. The 9's has a plastic liner in it and so, that sheath will probably work. It might even last a little longer than I would give it credit for, because the blade isn't going to hack it apart as quickly as say ..... the 10's. When I said the 10's sheath might be a little nicer it is because the materials feel tougher and of higher quality. The truth however is, there is no liner and my knife has already cut the stitching keeping it together. OK, I'm not sure I'm over stating things when I say this is a massive oversight when it comes to sheath making, and an issue that knife makers have had solved for about ten thousand years. Everyone who buys these things knows the sheath is going to be crap. I know I expected it to be and I don't care that it is crap. In fact, it would appear that even "nicer" knives come with equally craptastic sheaths and those who know this don't care. They don't care because either buying a nice sheath for it is practically a given, or if you're like me, you're just going to make your own anyway. However, I believe that leaves a lot of customers out to dry. I think Schrade knows this and tries to give them something they can use with a few gimmicky features to make the bitter taste a little more palatable. I guess that's fine - I guess I get it. But I'm just throwing this out; what if the shop in China making these things just never purchased another square inch of black nylon? Not gonna fly? No problem. But at the end of the day a totally basic sheath with a belt loop and plastic liner is all that should be included. I think the user, the one who plans NOT to throw the sheath in the trash upon arrival, is fine with having to unbuckle their belt to put it on and take it off so no Velcro. Snaps for the retention strap and no pouches, no MOLLE straps, no eyelets, no cordage, or any other cutesie nonsense. Make a plastic box the blade fits in, cover it with equally box-shaped nylon fabric, stitch it up, maybe rivet the liner in, done. No webbing anywhere. No Velcro anywhere. And this is only for people, as I said, who plan to use the unit the knife came with and if it were decent enough, maybe more consumers would too. For the rest of us, just don't bother including one. If money could be saved by making a no nonsense sheath (or none at all) it could be reinvested in making that sheath from better materials, lowering the price of the product, or improving the knife itself. All of which I would rather have than a sheath that's going to fail 10 minutes out of the box.
Email ThisBlogThis!Share to TwitterShare to FacebookShare to Pinterest
Labels: budget survival knife review, cheap carbon steel knife, extreme survival, quarter inch blade, schf9, schrade schf 10 review, tactical knife