UPDATE: The final product is done and up for sale! I have been wanting to create a rifle magazine carrier that I felt was good enough to sell for awhile now.  My first attempts at them were a success in my book and with a little tweaking and brain storming they seemed ready to evolve into something desirable. The first issue is that kydex mag carriers take up extra space on webbing when compared to nylon. There are some pretty clever designs out there that use less space and eventually I'd like to get to that point with mine, but most of the best known probably involve pretty significant manufacturing processes. My first couple designs used as much as 4 columns of MOLLE webbing and for a war belt, or battle belt, it really wasn't much of an issue because not many people run more than 2 or 3 mags on the first line gear. Everything else that I wanted on the belt, fit just fine. But, in the end, everything can be made a little better and cleaner. I realized that how I mounted the carrier was really the issue. Even though it was only mounted in two columns, the sides extended out into the neighboring columns and made them useless. It only made sense to center the carrier so that it fit inside 3 columns and left the neighboring columns totally clear for other things. Essentially, the new design takes up 6 columns for 2 carriers rather than 8. Given that a magazine will fit inside of 2 columns, that of course is the goal for the future. For now I have created my Gen II Kydex Rifle Magazine Carrier Prototype just to prepare readers for the eventuality of something like this going up for sale on this site. I'm not sure just yet how I want to approach it, and I will need to test and evaluate my carrier before that happens, but hopefully in the next few weeks I will have something solid. As a sneak peak, I am also working on a little something for the every day carry crowd to haul a multitool and light in a compact, but Kydex-tough package. 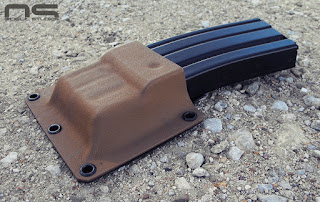 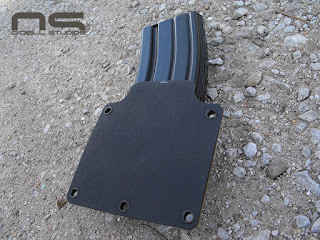 My first goal was to develop a method for tighter molding. It makes more sense to me to have the back of the carrier flat, however, that style produces certain problems where it is more difficult to get the mold tight on the sides. I am happy to say that I've overcome that issue, so the total width of this carrier is 4.25 inches. I liked the idea of having an indexing point molded in as well, which is the purpose of the dimple you see in the pictures. I also backed down the depth of the ribbing found on metal magazines, with the intention of making them a little smoother with Pmags and other polymer magazines. Finally, I used eyelets so that they can be fully modular. There will be loops available for 2 rows of webbing, 3 rows, 1.5 inch belts and 1.75 inch belts which will all use the same holes for mounting. I also intend to make much lower profile loops and see if I like them better than my first version which provide some standoff from the body. 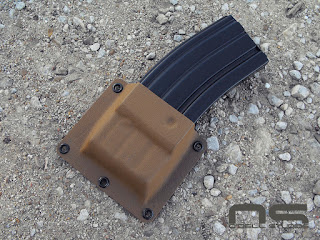 Now for some of the issues that I'll be addressing. For one thing the retention isn't what I'd like it to be with polymer magazines. I am working on which parts handle the retention because I don't want to use the ribbing as much for that purpose. My plan is to use the same retention used by the rifle instead and I just need to work on how deeply to mold that notch. I think more surface area contact will also aide retention so I will be removing the flare almost completely. Without it molded into 3 sides, as my previous version had, it really looses a lot of its usefulness. By taking it out, the kydex will contact more of the magazine's face, providing better retention. Stay tuned as I get the loops finished and work out the next prototype. I will probably start offering some of this stuff for sale simply because it works and someone could easily put it to use. That will help fund my progress as new carriers evolve.