I am hopeful that my next post will be alerting visitors that these units are up for grabs. I suppose you are welcome to "pre-order" them in case they move quickly but this is my first batch and all of them must go. I will also be selling some "scratch and dent" type units for cheap because they are perfectly functional but did not pass quality control, so to speak. At any rate, I wanted to throw up an alert post just to let everyone know that things are moving forward. Most of my Kydex order showed up over the weekend but was delayed thanks to the snow .... and there is supposed to be more to come. I like getting things done but being stuck in the house for days just isn't my bag.

Blah blah blah, let's talk about what you are seeing in the pictures. My understanding is that Kydex is a brand, so presumably when I purchase "Kydex" in a certain color, it will all be the same because it all comes from the same place .... or am I the crazy one? I ordered a big sheet of "Coyote Tan" Kydex and got what you see in the pictures. Now "tan" might be different from "brown" I can't really say for sure but either way it's a nice color, just not Coyote. I'll be sure to get pictures with Coyote fabric and an FDE Magpul PMAG so that people have a reference point, when I get them closer to completion. But in the end, I don't personally care much. Coyote is nothing like FDE, and whatever this color is, it's neither of those two. I think it's fair to call this "tan", plain ole tan. In my opinion it is still toward the middle of the gray scale, in that, it's still dark enough to be neutral or "drab" in tone. The most likely scenario is that I'll get material when I get it, make up a bunch of stuff, in a variety of colors and it'll pretty much just be luck of the draw, based on how I'm feeling that week. I have thicker material on the way as well, so you'll probably find an assortment of product variation but rest assured, I will be very clear about what I am selling at that time and take lots of shiny pictures to go along with it. For whatever reason I am leaning away from taking "orders" for my mag carriers at this point. I can't say why exactly, but I think the most likely reason is that I want to try many different color combinations, patterns, thicknesses, and I kind of want to do it whenever I feel like it. This differs from having to offer a certain product then having only that material on hand, ready for what may come. That sounds like manufacturing and manufacturing sounds like work. I have enough of that going on right now. 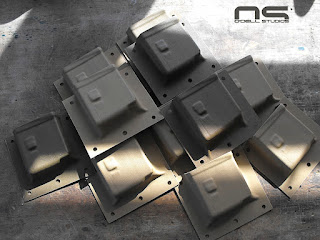 SO! The second picture does a lousy job of conveying color, but it was a neat picture so I went with it. It does kind of illustrate how these colors all have blending properties and the two colors look great together. You will note that 2 of the coyote pouches are Boltaron, not Kydex. I got a small piece just to see what it was like. It kinda sucks. It curls when it gets hot and is very frustrating to work with. However, it actually seems to be ever so slightly thicker than Kydex, even though all of this is .060 material. I can't prove it or explain it, it just feels thicker once molded. The smooth side is also much smoother than Kydex - it's slick and that's probably a positive. The color is also nearly identical to Coyote Kydex as you can see. The Kydex is a touch different but barely. It actually matches the Coyote nylon of my ATS War Belt very closely. Finally, it has a different, deeper texture. None of this is good or bad necessarily, it just is and I think the final product will service its owner equally. Once it's all put together and finished I will create a page specifically for them and announce that they are for sale. Thanks for stopping by!