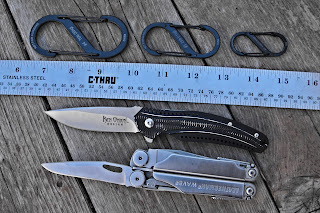 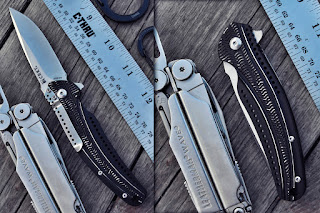 I'm mostly just having fun playing with simple Photoshop enhancements and practicing my photography skills, but I just got this CRKT Ripple based on all the great reviews out there and had to bust out the camera. And since there are so many reviews I figure there is no need for another one in any great length, but it can never hurt to add a few more interesting photos to the google search results. This is the aluminum K415KXP model which is the larger of the two and it is very light weight. Mine came razor sharp - shaving sharp - and it's awesome looking. I guess smaller knives are popular for EDC but in my opinion this is a smaller knife, so I opted for the larger version. I am hoping that the images give some idea of the size when compared to the Leatherman Wave because the Wave is a pretty compact package and the blade is pretty thin from spine to blade edge. The Ripple isn't a whole lot thicker so I think it can be fairly described as somewhat long and thin and the blade comes to a very fine point. The Wave used to, but one day I broke off about 1/32 inch from the tip fishing for something and reground it to a point, which I think is reflected in the picture. Anyway, my only complain is the worn look on the scales. I watched another reviewer suggest the same thing, but I found some images online that maybe there was some variation in this wear pattern. I think I would like it a lot more if they had hit all the high spots evenly, but as you can see that is not the case. I don't care much because it's probably going to end up more worn that that riding around in my pocket, but given that it's a pretty nice looking knife overall, this kind of hurts the appearance. If they had evenly knocked off all the highs it would have looked more purposeful and better fit the appearance and theme.
Additionally, it opens very smoothly and the flipper has aggressive jimping that makes opening this knife effortless. 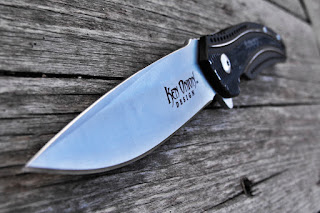 Finally, I tossed in a few Nite Ize S-Biners for size comparison also. There is a #2, #3 and #4 pictured which come in a 3-pack together.