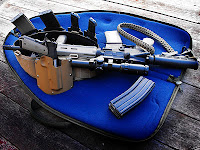 I've been meaning to get some pictures of my AR up for awhile so I went out this morning and snapped a few. Then just for fun I tried some simple Photoshop tricks to jazz up my lack luster photography skills - might have gone overboard on the first one. I haven't owned this gun long and I don't get to do the kind of shooting with it that I would like to do, but I feel like this is about as close to a "do-all" gun as a person can get. What I mean is not necessarily this exact combination of parts, but this style of AR15. There are lots of schools of thought on the subject and the closest one that I subscribe to is that there is no such thing as a do-all gun and there likely will never be. For one thing there is no magic bullet or cartridge to build around and if you bring in what-ifs from the entire spectrum of firearm ownership then it gets even harder to accomplish. To me, IF I had to describe a do-all gun or I had to build such an animal it would probably go something like this. Firstly, do-all probably stems from long and short range capabilities. This is the great divider I think because there is no way to get around the compromises that would have to be made here. A sniper rifle is a long range precision tool that will most certainly never be good for close range work. The closer it gets to being useful for toe to toe fighting, the greater the number of compromises necessary in its design.

What's more, this discussion seems to revolve around the SHTF side of the community, probably because they don't foresee being able to carry 12 different guns as they travel the post apocalyptic road ways of America. I would tend to agree, although guns are a little like cars in this respect; once the gas is gone, the vehicle is pretty pointless. My next thought is that the M4 carbine has sort of already become the do-all gun for our military. It's light (ish IMO), carries lots of BBs, reaches out about as far as most humans can reliably visually identify targets, works pretty nicely in confined spaces and can be tailored for specific purposes.

So where do I stand? Well, for one thing, I think I'd like to get as much stand off between myself and the threat as possible so barrel and optic come into play here. Carrying heavy guns around, plus whatever else, is a good way to get tired of carrying said gun, get lazy, distracted, worn out, or in some way unprepared for a fight. So I want to ditch weight where I can, or just leave off excess crap I can't use. Close range work is only considered simply because it's a do-all gun. So the standard 16 inch barrel length makes sense to me. I would almost consider a longer barrel over a shorter barrel but I would look to strike a balance between projectile velocity and weapon OAL. So my heavier, 1:7 barrel gives me heavier projectile options, maybe a touch more range and accuracy, and hopefully extended barrel life. I think this is a pretty easy area of the system to find good balance. Optics are the second. 1-4x or similar glass strikes a good balance. I find that 4x is sufficient to beat on upper-thoracic sized targets with ease at 300 yards and not difficult at 400. It seems to me that you can't really use your naked eyes to tell who or what you're shooting at any further away than that and while lots of people can make shots further than that they aren't likely reliable. Less-so with out equipment designed for that purpose. I think hits that are within average shooter range, are beyond iron or low magnification sight range, so an optic makes a lot of sense, especially when you're working with a single gun. Red dots are certainly not an option for end-of-civilization situations IMO anyway. Irons are vital and will get the job done from the end of your nose to as far as your eyes will let you get hits.

Everything beyond that is not so easy to strike a balance with. A lot of the rest is personal preference, and there are significant areas where this gun won't shine. With an optic you will be able to make some further-than-typical shots that are less likely without one. If that's the case, I would lean toward a gun that can do more reliable shooting at range over a gun that works great inside buildings. Accessories and enhancements are up in the air too. I think a light is important and useful, but beyond that, weight trumps most other additions for me.

I still understand (and feel) the desire to build short, fast guns. I really like the idea of a short, lightweight barrel and a zero magnification red dot. It's light, easier to carry around, gets fast hits. While this gun was not built as a do-all gun, it is the gun that best fits my specific needs where value is a major concern as well as the ways I am most likely to use it. I think friends will be vital to roaming the nuclear waste land and a do-all "group" might be more useful than a do-all gun. In the end, it's not a question of can the gun do everything that guns are capable of doing (because the answer is absolutely not), it's more a question of, can the gun do everything you are most likely to need it for?